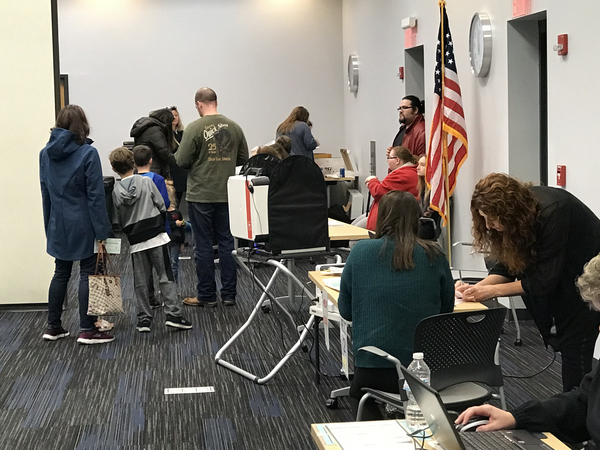 
Higher voter turnout is being projected across Livingston County on Election Day.

Local clerks had issued over 77,000 absentee ballots as of Friday. There are just over 160,000 registered voters in Livingston County and Clerk Betsy Hundley said almost 50% of voters had already cast a ballot. In comparison to the presidential General Election in 2016, there were only 31,565 total absentee ballots issued countywide. Hundley says there are a huge number of voters taking advantage of no-reason absentee voting. As for the overall rate of turnout – she says the county historically runs between 72% to 75% for a presidential election. Hundley believes they’ll exceed that number this year. Although it’s just a forecast, she says there’s a chance total turnout could be upwards of 83% to 85% - meaning those who cast ballots on Election Day and those who voted absentee.

Hundley tells WHMI they anticipate getting results in at reasonable time on election night and thinks they’ll have most, if not all, results by late into the evening. That being said, Hundley stressed this is a big election and they are working on accuracy over speed and they ask people to be patient She says they want to be prepared and make sure all paperwork for precincts is done absolutely correctly so if there was to be a recount, all precincts are in balance and re-countable.

Hundley reminds that they are limited with staff in the clerk’s office and sometimes they’re very busy assisting or trying to lend support to local clerks who might need help on a particular matter. She says local clerks have been putting in historic effort on this election and have been issuing ballots in unheard of numbers and are doing the best they can with what limited resources are available. Hundley says he county clerk’s website will be updated as soon as possible on election night, noting a lot of activity happens once polls close so it can take a little bit of time from when they receive results to getting them updated online but they’ll continue to do their best.

Hundley says they ask that any voters heading to the polls make a plan and know where their precinct is, which can be looked up on the county clerk’s website or on the Secretary of State’s website. She says they’re asking the public to wear a mask when voting but they can’t require it and assured that no one will be turned away. Hundley says people should try to avoid typical busy times if possible when there tends to be heavier volumes - in the morning when polls open, lunchtime and then when people get off work. If people have a flexible schedule, Hundley suggests voting during off-times when lines won’t be so long.

Hundley says there will be a lot of first time voters so election inspectors might be trying to provide instructions not normally required with more experience voters. She asks that people be patient with inspectors and thank poll workers because elections couldn’t be conducted without them.

Hundley says there are 16 jurisdictions in Livingston County that have absentee voter counting boards - which are sequestered groups of trained poll workers who are processing ballots for communities. She says those boards can start counting as early as 7am when polls open and they’ll continue until everything is processed. Hundley says the people on counting boards wait until polls close before they process final absentee ballots. She says two jurisdictions, Iosco and Unadilla Townships, will process absentee ballots in their own precincts on Election Day. All absentee ballots must be returned by 8pm on election night, when polls close.