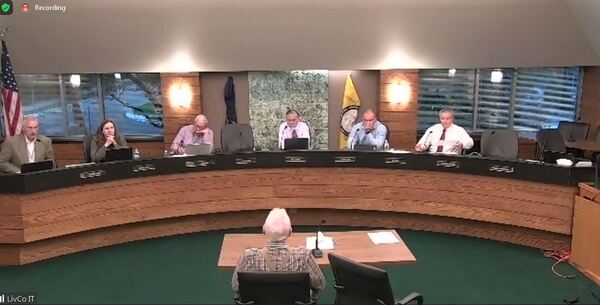 A Brighton Township resident expressed concerns to the Livingston County Board of Commissioners Tuesday evening about the appointment process for various boards and commissions, alleging that requirements for a posting were changed after he had applied and which then excluded him.

There’s currently a vacant seat on the county Planning Commission for a member representing education.

Resident Bob Sexton, a Democrat, spoke during call to the public and said he had applied for the position but was shocked when after the application deadline had passed he received a call from Commissioner Doug Helzerman informing him they were going to re-open the posting with new requirements for the posting that applicants had to be on a school board or an administrator.

Sexton told the board he realized that excluded him – even though he has over 35 years in education having taught English and speech at the high school and community college levels for more than 30 years, with the last 20 at Fowlerville High School.

Sexton said whether it was the case or not, it certainly felt like it was done to exclude him and he’s never had that feeling before. He clarified that just because he applied didn’t mean he thought he would be selected. Sexton added he’s applied for many positions in his lifetime that he didn’t receive but this was the first time he felt that maybe he wasn’t being treated fairly and perhaps it was because of his political affiliation and philosophy that he was not going to be included.

Sexton concluded by saying he previously sought a board seat when it became available to apply and interview and he did so hoping to be a voice but understood when he wasn’t selected. He said he then finally decided he would apply for positions primarily because five people on the Commission said there were many openings on boards and they need people so he thought he was being encouraged to apply and that’s why he’s been doing it.

Per rules of order, commissioners do not typically respond to comments made during call to the public.

Meanwhile, residents interested in applying for the vacant seat on the Planning Commission for a member representing education have until 5pm this Friday to submit a resume and letter of interest.

The Commission meets on the third Wednesday of each month at 6:30pm. The posting for the position states that Planning Commissioners are expected to attend monthly meetings to review and make recommendations on rezoning cases, zoning ordinance and master plan amendments as submitted by the sixteen townships in the county. Commission members receive mileage reimbursement and per diem compensation for each meeting they attend.

More information is available in the web link.