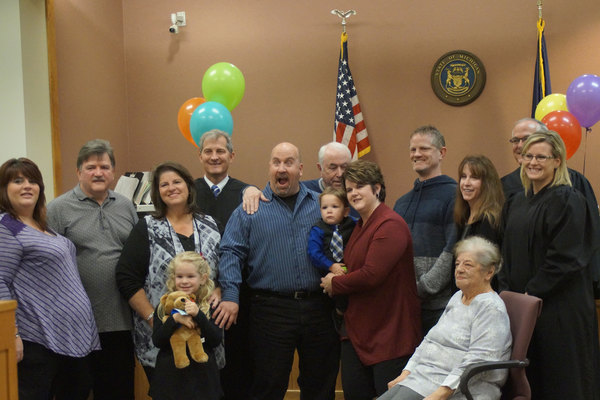 Livingston County families will celebrate the Thanksgiving season by welcoming new members to their families on Adoption Day.

Adoption Day marks the creation of a forever family for children in foster care. It's a way for courts around the state and country to bring a new light to children in foster care and the need for permanency in their lives. It’s typically held the Tuesday before Thanksgiving in Michigan, although nationwide it’s celebrated the Saturday before Thanksgiving. “Giving Thanks for Families” is the theme for the holiday tradition that highlights the importance of adoption and the needs of children in foster care. Livingston County’s 44th Circuit Court will join the State of Michigan in celebrating Adoption Day on Tuesday, November 26th and adoptions are being finalized for several local children.

Permanency & Adoption Coordinator Jeff Johnson says Livingston County has been participating every year since 2015. He tells WHMI they do adoptions for all types of cases such as step-parent, adult, relative and international adoptions but the main focus of Adoption Day and Adoption month is to spotlight children in foster care that are waiting for forever homes. Johnson says there are 13,000 children in foster care statewide. He says many kids in foster care are with relative placements but there about 300 that don’t have an identified an identified outcome for them to go and become part of a family – adding when children are not able to be placed with a relative or identified foster family; they’re just waiting for permanency. Johnson says Adoption Day is something they look forward to every year. He says a lot of people come into court on not such a happy occasion so this event really brightens the day and for them, it’s a way to really shine a light on creating permanency for the children and that’s ultimately their goal. Johnson says six adoptions are planned currently next Tuesday and all are foster care children with the exception of one step-parent.

Adoption Day will start at 9:30am Tuesday in courtroom #3 at the Livingston County Judicial Center with Livingston County Chief Judge Miriam Cavanaugh presiding. Joining her will be Michigan Court of Appeals Chief Judge Christopher Murray and Juvenile Court Referee Chelsea Thomason. Multiple agencies will also be present representing the children in care, along with their attorneys, family and friends.

The courtroom will be open to the public for the event and a reception will follow for everyone to celebrate. (JM)