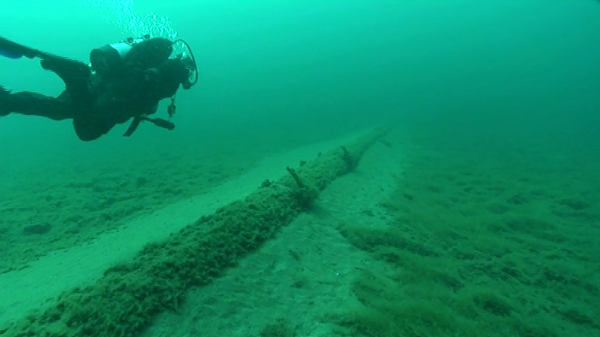 One of 25 statewide parties planned for the hoped-for retirement of a controversial oil pipeline is set in Pinckney next week.

The event, which will be held Monday the 23rd, is hoping to bring awareness to the aging 65 year old Line 5 pipeline that carries 22-and a half million gallons of oil underneath the Straits of Mackinac daily. Pinckney resident and environmental activist Terri Wilkerson is organizing the local event. "Those pipelines are 65 years old this month and they are in the worst spot they could possible be in the Great Lakes because the amount of water that goes back and forth between Lake Michigan and Lake Huron is ten times the volume of water that goes over Niagara Falls each day and it reverses direction every few days."

The 645-mile long pipeline crosses 23 counties and 360 waterways in Michigan and is owned by Enbridge, the same company responsible for nearly a million gallons of oil spilling into the Kalamazoo River back in July of 2010. However, Enbridge officials have repeatedly insisted the lines are safe and points to an independent review by the Pipeline and Hazardous Materials Safety Administration of the company's inspection data on Line 5, which, "concluded that the Line 5 Straits crossing is safe and fit for purpose."

Despite that, Wilkerson and a number of others want to see the state put an end to Line 5 permanently, saying that Enbridge was granted an easement by the state in 1953 to cross the Straits, but that it is subject to "the public trust." Opponents of the pipeline say that Enbridge has repeatedly fallen short of that standard with shoddy maintenance, concealment of damaging information and a track record of failure.

The Line 5 Retirement party is being held in Wilkerson’s home next Monday between 6 and 8pm. RSVP is required by either calling her at (734) 355-7799‬ or emailing her at terri@a3homes.com