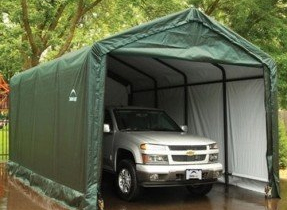 Storage tents will no longer be allowed in resident’s front or side yards following a vote by the Linden City Council.

The city’s planning commission recommended that city council adopt ordinance changes that would only allow storage tents in back yards. The issue had been delayed two weeks, while council sought an opinion from legal counsel. But the Tri-County Times reports that City Attorney Michael Gildner said the measure should be adopted, calling it, “necessary clean-up work.” The change, which was finalized at Monday's council meeting, requires temporary accessory structures to follow the same requirements as permanent accessory structures, prohibiting them from front or side yards.

Previously the city had no control over the structures, but with the new ordinance officials can legally order them removed. (JK)