LETS Seeking Grant For Brighton-Area Base 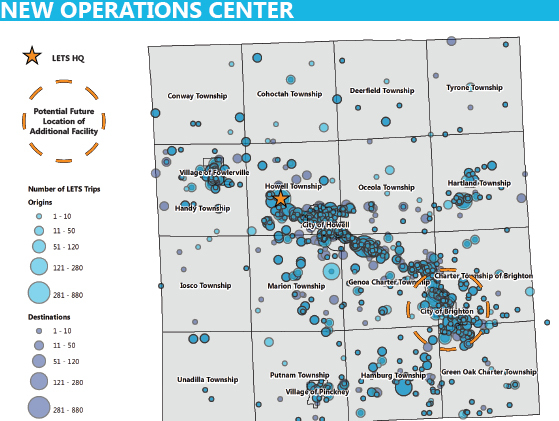 
A federal grant would allow the Livingston Essential Transportation Service to build a second base for better serving customers and its own staff.

LETS Director Greg Kellogg was before the County General Government and Health and Human Services Committee seeking initial authorization towards applying for a Rebuilding American Infrastructure with Sustainability and Equity, or RAISE, grant. LETS is headquartered in Howell Township, but the county’s 2019 Transit Master Plan recommended adding a satellite operations center in the eastern half of the county and a transit hub. The transit hub would be a place for connections to other regional transit agencies and would also support Michigan Flyer. Michigan Flyer has been operating out of the Brighton Meijer parking lot, and this would provide them a permanent home. The hub would also be valuable if the Grand River LETS Route between Howell and Brighton comes to fruition. Kellogg said that if they are going for grant funding, it made sense to him to combine the two facilities into one.

Kellogg said that if you look at the map of where they do business, a little more than half of it is in the eastern half of the county. A operations center and transit hub in Brighton would allow them to split their fleet their fleet and serve the east-half faster and more efficiently. It also allows staff to begin their shifts there, and not have to drive an empty bus, which Kellogg reminded has costs, to Brighton, to start. The director said that LETS has been leasing a couple spaces at the Brighton Area Schools bus garage for the past 2 years as part of a small test-case and that has worked well.

Kellogg gave a conservative estimate of $10-million for the project, which would be 80% funded from the federal government and 20% from the state. If they are successful and the County accepts the grant, Kellogg said that is just the first step, as they still would have to do a property search and all the site planning that would follow. He estimated the process could continue for a couple of years. Having passed through the General Government Committee, the request to apply for the grant will now go before the Board of Commissioners.