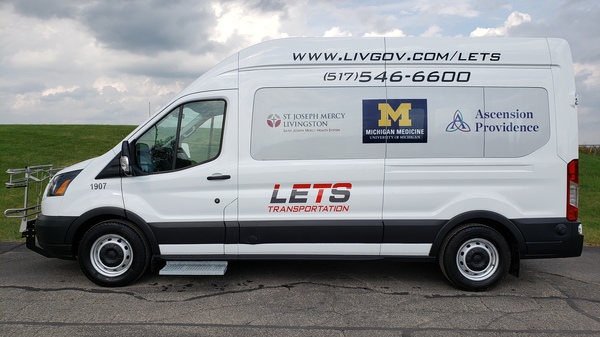 
The Livingston Essential Transportation Service or LETS is switching gears and has diversified services and scheduling during the COVID-19 crisis.

All public transit services have been suspended except for critical medical appointments and dialysis transportation, which is running Monday through Saturday as normal. LETS Director Greg Kellogg says the decision made March 17th when the county closed other non-critical services in accordance with guidance from the state and health officials while also looking at what other agencies were doing. Kellogg noted Governor Whitmer’s Executive Stay Home, Stay Safe Order specifically exempts public transit but it’s limited to activities necessary to sustain and protect life. Kellogg says they’re abiding by all social distancing measures and group gathering limitations - which really limits their capacity on buses and they really can’t have more than a couple people in order to be six feet apart from one another. Therefore to put their resources to work with the limited staff they do have, Kellogg says they decided to reach out to some of the local human service agencies and have been providing food delivery services for Meals on Wheels, Salvation Army and Bountiful Harvest among others to do what they can for those most in need right now. He noted that many organizations but especially Meals on Wheels have a lot of volunteers who are senior citizens themselves and are highly susceptible to the virus so many have stopped volunteering.

Kellogg tells WHMI they’re just trying to fill in gaps with the different volunteer meal delivery services and do some good for the community while they’re not able to transport people as part of regular transit service. He says they work through each agency, which tells them what their needs are. Kellogg says consistent with the county’s COVID-19 leave policy, all of their employees are getting paid – it’s just the ones who are able to work are working as needed. He noted that many of their drivers are seniors and just like the general population, a lot have underlying certain conditions that make them more susceptible so they definitely have to be cognizant and aware of their safety too. Kellogg says they’re just trying to provide as much service to the community as they can and keep their drivers safe too. He stressed how much they appreciate their drivers stepping up during these uncertain times, adding their employees are very civic minded and public service orientated and deserve a lot of credit for sticking with the community during the crisis. Kellogg noted that even before regular transit service was suspended, LETS started implementing an extremely regimented, disinfecting cleaning routine that is continuing.

Kellogg says he just wants the community to know that LETS is not shut down and still out there - providing service in the best way they know how. At the very least, LETS will be shut down for regular transit services until the end of the Governor’s Executive Order in April. Kellogg says they’ll reevaluate at that time but things are still moving fast and changing very quickly so they’ll continue to monitor what the Governor and Health Department are recommending.