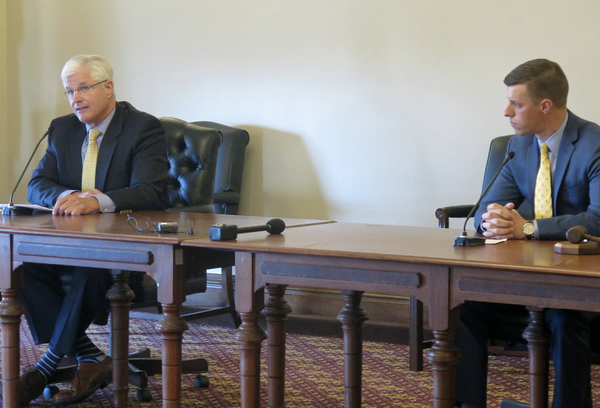 The lawsuit, filed in the state Court of Claims, says a 1945 law that gives the governor broad emergency powers to order such restrictions governs local, not statewide, declarations like one that has been in place since March. A 1976 law gives Whitmer emergency authority only for a limited period that expired when the House and Senate did not extend her emergency and disaster declarations last week, according to the suit that alleges a “patent disregard for the law.”

The stay-home directive is in place at least through May 15 and generally requires people to shelter in place except to do critical jobs, exercise outdoors and buy groceries or other items. An order closing places of public accommodation and limiting restaurants to pickup and delivery is in effect through May 28.

“We’ve got a governor that’s acting in ways in which there’s no representation and no voice in any decision making. It’s our responsibility, quite frankly, to ensure that that trajectory changes,” Senate Majority Leader Mike Shirkey, a Clarklake Republican, told reporters.

House Speaker Lee Chatfield, a Levering Republican, said “people are hurting and we need to take action now to ensure that their livelihoods are restored, to ensure that they have a voice at the table, because right now they don’t.”

“Her No. 1 priority is saving lives. She’s making decisions based on science and data, not political or legal pressure,” she said.

Asked earlier this week about lawmakers’ contention that there must be checks and balances on the executive branch, the governor said she was “happy to work with the Legislature. Ideally, we all get on the same page here. But what I can’t do is negotiate like this is a political issue. This is a public health issue.”

Nearly 4,200 people in Michigan have died of complications from COVID-19, the serious respiratory disease caused by the new coronavirus.

Whitmer has been consulting with business, labor and health care leaders and has gradually let some industries restart, including commercial and residential construction that will resume Thursday. But GOP leaders said they do not know the basis for her decisions, calling them a “mystery,” particularly as the statewide curve of cases flattens.

The governor first declared a state of emergency on March 10 — the night of Michigan’s presidential primary — after announcing two positive cases. She cited three sources of authority: the 1945 law, the 1976 law, which requires a legislatively approved extension after 28 days, and the state constitution. The Legislature on April 7 agreed to lengthen states of emergency and disaster through April 30, which was shorter than what she had requested.

It balked last Thursday, though, on extending the declaration again without her agreeing that all future stay-at-home-type orders would be enacted through bipartisan legislation. Whitmer issued new orders to continue the emergency through May 28. She has said the stay-at-home directive rests on her powers in the 1945 law, which were not touched by the 1976 law.

The suit seeks a quick ruling.