League of Women Voters Preparing To "Promote the Vote" 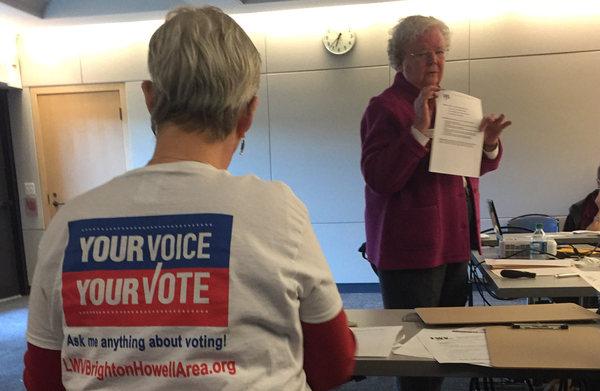 The local League of Women Voters Unit is eager to educate citizens about a proposal to amend Michigan’s constitution as it pertains to certain voter’s rights.

The LWV will soon be circulating a petition to get the proposal on the November ballot as part of the “Promote the Vote Michigan” campaign. The movement proposes amending the state’s constitution to protect voter’s rights and ensure a fair system, according to proponents.

Some of the proposed changes are providing registered voters with an absentee ballot for any reason, guaranteeing veterans and families that live overseas receive their ballot 45 days prior to the election and allowing an audit of election results.

Ellen Lafferty, Chair of the LWV Brighton-Howell Unit, says another important provision is automatically registering citizens to vote once they’re 18-years-old unless they decline. Campaign Captain, Renee Guido, says the proposal also looks to protect the right to vote a secret ballot, allow voters to register up until 15 days prior and guarantee the option to vote straight party.

The LWV of the Ann Arbor Area’s Brighton-Howell Unit met at the Howell Carnegie District Library Wednesday to learn more about the campaign. The meeting was led by Susan P. Smith, President of the Lansing-area LWV, who says the voting system needs to be “more modern”. Smith stressed the idea that voting should be convenient, accessible and secure. She helped prepare the group for petition circulation with a training session that is required for members. A minimum of 315,000 signatures must be obtained for the proposal to be placed on the November ballot.

The local unit will also be holding a voter registration training session Monday at the Brighton District Library. Details are available at the link below. (DK)