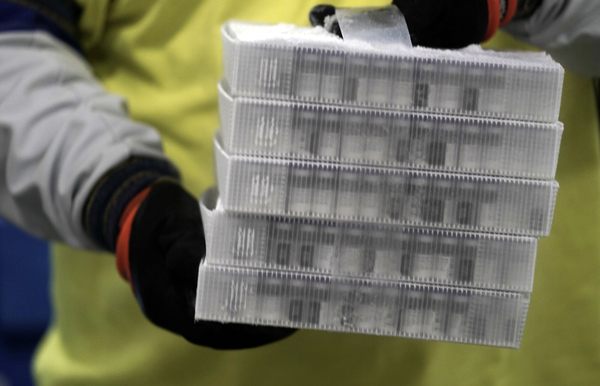 
The Livingston County Board of Commissioners was updated on the status of vaccine arrivals and distribution from local health officials.

During their online meeting Monday, Director and Health Officer for the Livingston County Health Department Dianne McCormick said there were still a lot of unknowns looking forward. The county received 1,200 doses in December, which McCormick said will have been entirely administered by the end of this week. Local hospitals and health care facilities, like St. Joesph’s, Michigan Medicine, and IHA have also received 1,000 doses that they are distributing to staff and eligible patients.

McCormick said they have been informed that their next shipment will be arriving of the week of January 25th , but it is of a still unknown quantity. They are hoping to receive some kind of word on how many are coming, but not knowing, she says, makes it difficult to plan for.

She and Medical Executive Dr. Juan Marquez both said that the health department is working with these health care providers and other community partners, like the Michigan National Guard, in anticipation of being able to vaccinate more residents. McCormick said several health care organizations may have their own opportunities coming up, and they have several providers and pharmacies in the county that will be in direct shipment of the vaccine when it is more readily available. The issue remains that they just don’t know when that will be.

Residents, meanwhile, can visit the health department’s website and fill out an appointment request for when the vaccine is available. There are questions on the form to help slot people into the proper phase they belong in, and appointments will only be made available to equal the number of doses received.

When they are able, McCormick said they are looking to having vaccination sites open daily and on weekends. She said she was encouraged from a call today with the Michigan National Guard. McCormick said she asked if they needed 20 vaccinators if it would be a problem, and the MNG said they would get her what she needs. The LCHD is also exploring drive-through clinics, but are hesitant to do it in February when weather and temperatures might be dangerous for those administering doses outside. McCormick was also optimistic that local parks like Kensington and Island Lake were willing to partner when the supply allows.

The LCHD is also working on ways to assist seniors without internet access schedule appointments, and it was noted that the state is setting up 2-1-1 to help with that.

Commissioner Carol Griffith asked if someone from outside the County could come and get vaccinated here. McCormick said if you don’t live here, then “no,” but if you work as a teacher or other essential job in the county, then “yes.”

Commissioner Mitchell Zajac said he’s had conversations the health department and State Senator Lana Theis’ office. He brought forth concern that Livingston County isn’t getting its fair share of vaccines from the state. Zajack believes the following numbers need to be understood and transparent to the Board of Commissioners and the public. He said Livingston County is the 11th largest county in population, but received 35th highest amount. There are 25 counties with less population than Livingston County that received more doses than Livingston County. Zajack said Mason County has a population of about 29,000 and has received 2,700 vaccines; which in terms cases-per-dose is .33; Oceola County has a population of 23,000 and has received 2,800 vaccines, with a case-per-dose of 0.26. Dickinson County, Zajak reports, has 25,000 people while receiving 3,325 doses. Their case-per-dose is 0.59. Livingston County, he said, has a 193,000 residents but has only received 2,200 doses, with cases-per-dose, locally, being 3.18.

Commissioners Lawrence and Jay Gross and Kate Lawrence expressed concerns at those numbers, wanting to know what could be done. McCormick said they need to see what they get in this next shipment.

The CDC is holding back second doses for people that have had their first, and the County is expecting to receive their allotment of those next week. McCormick said she has talked with Mona Shand, representative from Congresswoman Elissa Slotkin’s off, and that with vaccine being produced daily, McCormick thinks a bigger portion should be shipped out to the states, and that they shouldn’t be holding back as much as they are.

She said it’s going to take a few more weeks for more clarity, and the size of their next shipments will help tell them how to plan, building up towards when they can provide mass vaccination clinics.McCormick said hopefully health care systems will see a ramp-up in their cache and will be able to provide more opportunities. She said the state needs more inventory to push out, but it’s going to take a few weeks.

Residents, meanwhile, can visit the health department’s website and fill out an information form to make an appointment when the vaccine is available. There are questions on the form to help slot people into the proper phase they belong in, and appointments will only be made available to equal the number of doses received.