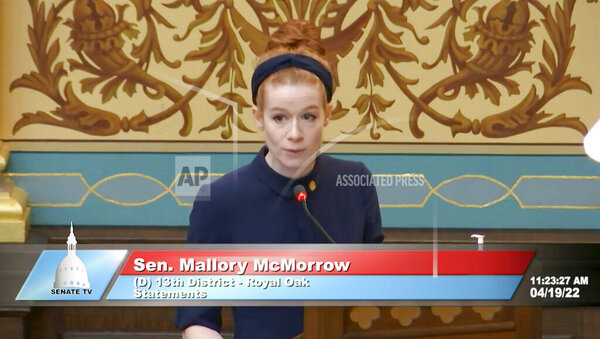 
A Michigan lawmaker, mother and LGBTQ rights supporter who was accused by a local Republican colleague of wanting to “groom” schoolchildren says her impassioned response resonated because people are sick of such attacks.

State Senator Mallory McMorrow, a Democrat from Royal Oak, blasted Senator Lana Theis, a Republican from Brighton Township, for alleged accusations made in a recent fundraising email – which followed an invocation that prompted three Democratic state senators to walk out of the session in protest.

McMorrow says there was no evidence to support the accusation and gave an impassioned and emphatic speech on the Senate Floor, which has since gone viral.

McMorrow has criticized a proposed bill that would restrict educators from discussing gender issues and sexuality in schools. Senator Theis sent out fundraising emails last week that stated “Progressive social media trolls like Senator Mallory McMorrow (D-Snowflake) who are outraged they can't teach can't groom and sexualize kindergarteners or that 8-year olds are responsible for slavery”. A link to the email is provided.

The salvos are among the latest to draw attention as conservatives push to make education a political wedge issue.

The release references Theis' invocation delivered prior to a Senate session in which she claimed that children are “under attack” from “forces that desire things for them other than what their parents would have them see and hear and know.” It says Theis apparently was referring to teaching about LGBTQ+ issues and the history of racism in the country.

Daubemier said “Lana Theis is engaging in ‘eliminationist’ rhetoric – that is language that accuses your political opponents of actions so vile that it makes them unworthy of even existing so eliminating them is justified. The language she used in her fundraising email is exactly the same that authoritarians throughout history have used to stir up their supporters to political violence. It is beyond the pale in a democracy".