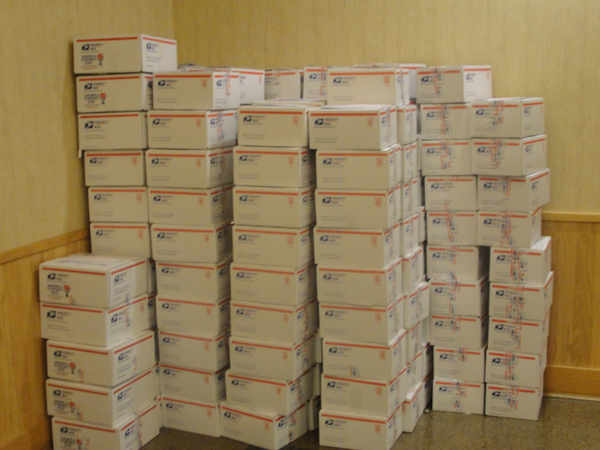 Donations are being sought to help make the holidays a little brighter for men and women still serving overseas.

The Ladies Auxiliary Post 4357 in Brighton is collecting donations to include in packages for troops that will be mailed out in December and arrive just before Christmas. Cards or letters of appreciation and support are being sought, along with snacks and personal care type items.
Auxiliary President Tami Spiece tells WHMI they like to make sure the troops are taken care of at Christmas time since most are away from family and friends, adding they just want them to know people are thinking about them and appreciate what they do for their country and community. She says donations have been down the last couple of years and they would really like to send out around 100 packages this year.

Donations will be accepted through the end of November, as Spiece says they’ll need to start sorting and packing boxes the following week. Donations of hard candy, beef jerky, energy bars, flavor packets for bottled water, personal care products such as wet wipes or deodorant, playing cards, DVD’s and white t-shirts are some items being collected. Spiece says basically anything that is small with a shelf life is good and they like to put a variety of products in each package. After everything is collected, packages will be put together and shipped out to the different addresses they’ve received. Spiece says they are also seeking the addresses of any men or women who are deployed so they can send them a package. Monetary donations are also being accepted to assist with the shipping charges, which gets expensive.

Items can be dropped off at the American Spirit Center on Grand River in Brighton, which is open 11am until around 8pm Monday through Saturday and from noon to 8pm Sunday.
Anyone with addresses of deployed men or women should contact Sherry Gransden at 810-623-6652. Spiece says monetary donations can be dropped in the clubhouse mailbox on the wall. Checks should be mailed to VFW Auxiliary Post 4357 P.O. Box 485 Brighton, MI 48116. (JM)