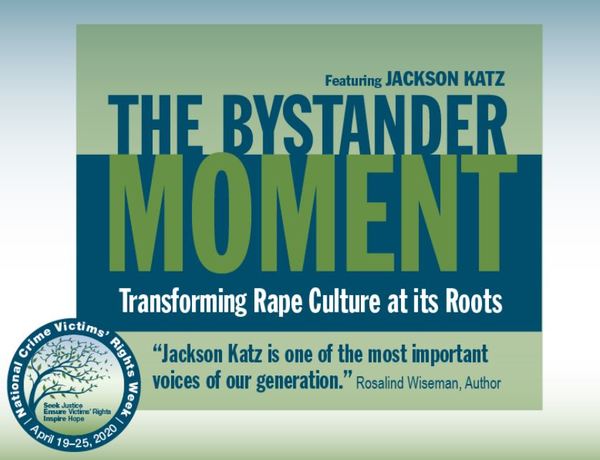 
A film and virtual community conversation was held Thursday that focused on transforming the current rape culture and prevention of gender violence, domestic violence and sexual assault.

The LACASA Center hosted the event to help raise awareness about how to disrupt the culture of silence in the Livingston County community by practicing and encouraging bystander intervention. The sexual assault awareness event was rescheduled due to COVID-19, and originally was to be held in April, which is National Sexual Assault Awareness Month. June is recognized as LGBT Pride Month. The virtual event featured a special documentary screening of “The Bystander Moment” and an interactive panel discussion followed. A wide range of topics were covered including gender violence, sexual violence racial issues, creating safe spaces, and having challenging conversations and training at college university levels. There was also a focus on acceptance and the importance of having hard conversations that can be difficult but also set people free.

The featured speaker was Nicole Denson, the Director of Department of Victim Services at Equality Michigan, a statewide LGBT organization and a sexual assault survivor. She provides advocacy services to those in marginalized communities with a focus on crisis intervention, counseling and advocacy for survivors of human trafficking and other violent crimes. Denson defines herself as an “unapologetically black queer woman who believes all survivors of trauma deserve equal rights, respect, dignity and safety”. She expressed a desire to dismantle the silence that permeates everyone’s daily lives – noting everyone was going through a global health pandemic yet had the open wounds of a racial epidemic. Denson commented there are safe spaces but everyone is fighting against a patriarchy. She says starting early is quintessential to healing and passing down better behaviors, which is what they’re doing in the LGBT community as people of color. Denson said she wished she had school programs like LACASA’s when she was younger. Shew stressed that people need to continue to have conversations and lift people up - not say “I don’t see color and I don’t see sexual orientation”. She says transparency is how to get rid of silence and fear and be honest - even if it’s uncomfortable. Denson added talking about sexual assault is uncomfortable and talking about how to change it is also uncomfortable but needed.
Rape culture and victim blaming was also addressed. It was stated that making victims feel blamed for what happened to them is a really big part of rape culture and although it might not always be someone’s intent - that is the impact.

Pam Maas from the Livingston County Prosecutor’s Office said system changes are coming so when cases come in they have a good response for victims and survivors of sexual assault. She said they have to be open-minded about cases, encourage good investigations, educate everyone about rape myths, challenge those, and make sure they’re encouraging people to listen to voices of victims in the community. She said they also need to change people’s perceptions of how they’re addressing sexual assaults in the criminal justice system and increase the investigative focus on a perpetrator’s behavior. Maas said they’re constantly challenging the standards because many of the myths of rape culture come into play when cases are investigated and giving victims and survivors the opportunity to come forward and report what has happened to them. She said they’re challenging the way everyone is involved is responding when sexual assaults are reported and using a much more trauma informed response when victims do come forward. Maas said they must keep their focus on offender behavior versus victim behavior and shift that paradigm while giving victims a voice and listening.

At the end of the panel discussion, various awards were presented to local individuals and agencies that have gone above and beyond to “seek justice, ensure victim’s rights and inspire hope” the NCVRW theme for this year. Among the awardees and panelists were Denson, Maas, Livingston County Prosecutor Bill Vailliencourt, Matt Oliver from Cleary University, April Woods with Pinckney Community Schools, Brighton Police Officer Kristi Bell who also serves as Brighton’s School Resource Office, DeAndre Lipscomb from Lake Trust Credit Union and Nicole Mason with Chem Trend.

To conclude the event, panel members and attendees observed a minute of silence to recognize those killed by violent perpetrators.