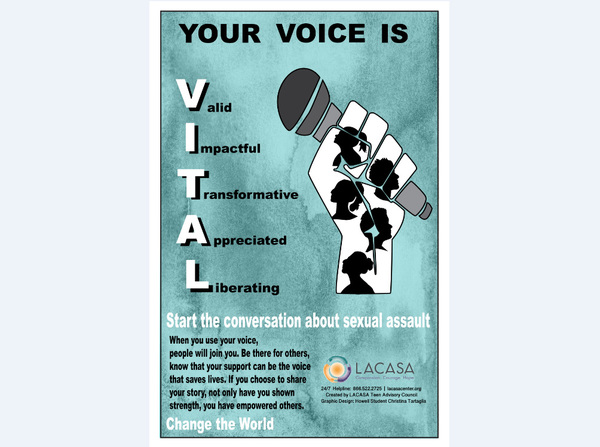 A group of local teens will visit Livingston County high schools this month to encourage fellow youth to speak out against sexual assault.

LACASA Center’s Teen Advisory Council has launched this year’s campaign, now in its 8th year. Called “Your Voice is Vital”, organizers say it is designed to empower teens to use their voice to start a conversation about sexual assault and as a result, change the world around them. LACASA’s Youth Prevention Services Coordinator Kayla Grant says the campaign is about, “standing up, speaking out and supporting survivors.” They want teens to talk about the misconceptions surrounding sexual assault and to become advocates.

During a series of high school workshops, teens participate in special activities and receive awareness literature, fliers, resource cards, and lip balm with the message “Your Voice Is Vital, Change the World.” New this year was a graphic design contest, which was won by Howell High School student Christina Tartaglia. Grant said teen council members crafted the campaign messaging, which encourages students to listen, believe, support, and speak out for victims and survivors.

To learn more about the campaign, the link below.