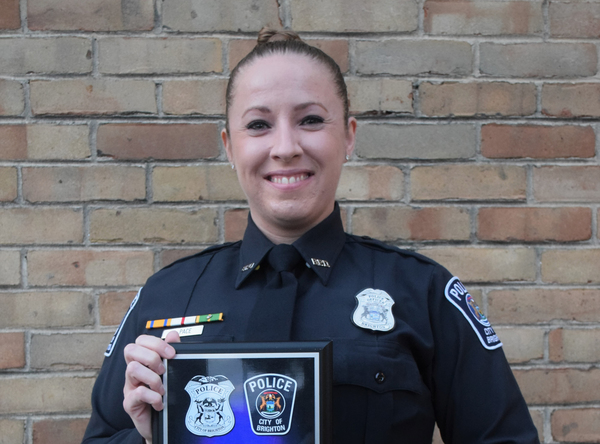 The Brighton Police Department’s lone female officer has been named “Officer of the Year” for 2017.

The announcement was made during last Thursday’s City Council meeting. The officer of the year is Kristi Pace, who has been with the department for two years as a patrol officer. Police Chief Rob Bradford says that Pace is, in his words, “highly regarded as a new, up-and-coming leader of the department, (and) “is very well-respected” by her fellow officers.

Bradford described the incident that led to Pace’s being named Officer of the Year, which occurred last May on Old US-23 in Brighton Township. He tells WHMI it involved a suicidal man with a gun who was walking toward a Michigan State Police trooper while pointing the gun at him. He says when the man continued to approach the officer, the officer fired. Bradford says that Officer Pace immediately began to render First Aid to the man. However, his injuries were too severe and he died several hours later.

In addition to her responding to several life-threatening situations, Bradford credits Officer Pace for her efforts to improve her education and training. Last year she attended the FBI’s Crisis Negotiator School, as well as Evidence Technician School and Taser Instructor School. With the additional training, Pace has since become a member of the Brighton department’s Crisis Negotiator Team, Investigative Resource Unit, and she is a Taser instructor. The Officer of the Year award is determined by a committee consisting of a command officer, a patrol officer and an administrator, who make the determination based on the recommendations of the officer’s peers. Bradford says that when Pace was hired they were not specifically looking to bring in a woman officer, saying that Pace “was the most qualified” among all the applicants. (TT)