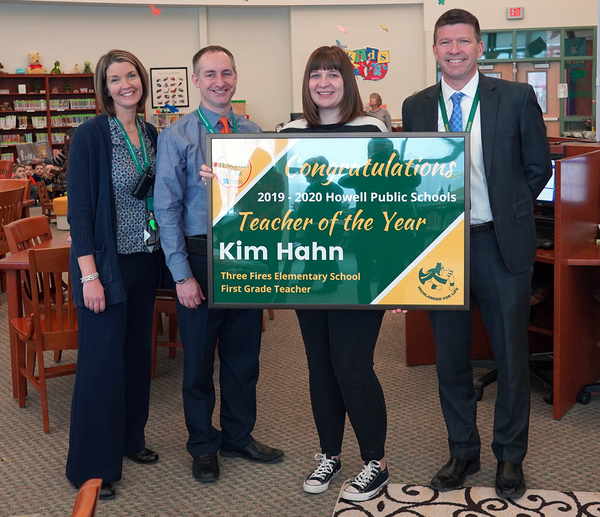 A teacher at Three Fires Elementary has been named as Howell Public Schools’ Teacher of the Year.

Kim Hahn, a first grade teacher at Three Fires Elementary, was recently named the 2019-2020 Howell Public Schools Teacher of the Year. Hahn was surprised with the Teacher of the Year award by Superintendent Erin MacGregor, Three Fires Principal Bob Starkey, and many of her former students. Several Three Fires Elementary teachers and members of Hahn’s family were also part of the surprise. Hahn has been teaching at Howell Public Schools for 18 years.

Hahn reportedly received multiple nominations for the award, with each highlighting her willingness to always go above and beyond to ensure that all students achieve success, her passion for teaching, and her ability to find innovative ways to deliver the curriculum. A committee of 22 district stakeholders comprised of teachers, support staff, parents, central office administrators, and a school board member met February 4th to consider 82 Teacher of the Year nominees. After reviewing the nominations, the committee selected Hahn as this year’s winner. She will now represent Howell Public Schools in the Michigan Teacher of the Year competition.

MacGregor says, “I could list a million things that make Mrs. Hahn such a special educator. Most importantly, she provides a safe environment for our students and challenges them to be their very best.”

Starkey says, “Mrs. Hahn always puts her students first and does what is in the very best interest of her students and to help them succeed”, adding, “She sets the bar for classroom management and creates an environment where students can take risks and where all students feel loved. She is always an advocate for her students, our school, and Howell Public Schools.”

Hahn says being named Teacher of the Year is a true honor and that it is a privilege to be a part of a team of so many dedicated educators, working together daily to ensure the success of all students. The Howell Board of Education will honor Hahn at its March meeting.