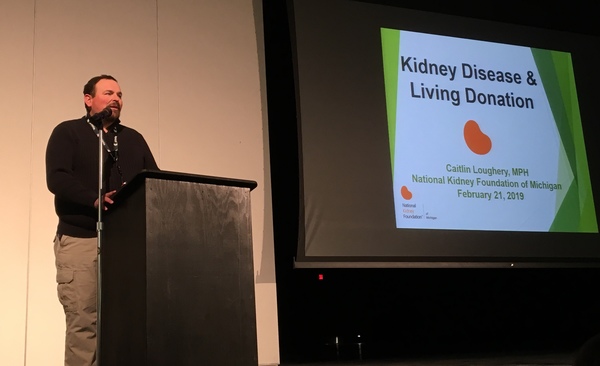 An event at Parker Middle School raised awareness about kidney disease and organ donation, as one of the school’s own teachers battles the disease while seeking a donor.

Kidney Disease and Organ Donation Information Night, which was held at the school in Howell Thursday, was led by Parker Middle School Band Teacher Jeff Stimson. Stimson, who has polycystic kidney disease, is on the University of Michigan’s kidney transplant waiting list. Stimson may have to go on dialysis soon as he does not think his kidneys will last long enough, based on the list’s five to seven year wait. Stimson wanted to hold the public information session to educate attendees about kidney disease and a donor’s ability to save a life.

Stimson has been married to his wife Bernadette for about 25 years with two children ages 10 and seven. He shared his story of his battle with the disease and seeking a donor, as well as the need to spread awareness about both issues. Stimson says, "It will just increase the quality of life that people can have that need those, not just for kidneys but for everything and I think people need to look into that and know more about it...Getting a transplant would mean that I would have more energy for my two children and my wife and my students and my band family and all the people I work with every day. Just to have the energy to get up and do what I want to do."

Featured at the event were several guest speakers, including Lynette Bailey, who donated one of her kidneys to her friend Jim. Bailey spoke from a donor’s perspective, sharing her experience and reason for donating. She suggested potential donors ask themselves what if they were the one in need stating, "I think they would want somebody on that donor registry and I think they would want somebody if they can come forward like I did for Jim to help them as well...It was humbling. It gives you a deeper appreciation for the simple things in life."

Gregory Jones was also a featured speaker as an individual who is currently on dialysis and the transplant waiting list. Jones has been on dialysis for five years and says there are difficulties, like an incredibly restricted diet, a lot of medications and always feeling cold. He encourages both living and deceased donation, though does note that organs from living donors typically last much longer than those from a deceased person.

Deb Gustafson spoke as a kidney recipient and a volunteer with Gift of Life Michigan. She says her friend and living donor Bonnie is her “angel here on earth” adding, "...it is a miracle. You're giving somebody the gift of life. You can't express fully how you feel, the words just aren't adequate to say thank you." Gustafson says she doesn't remember the day of the surgery but says when she woke up the next day her first questions were, "How is Bonnie?" and "Did it work?" She calls the moment she learned her friend was alright and that the surgery was a success an "awe-inspiring moment".