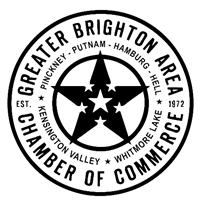 The Kensington Valley Chamber is now a formal division (chamber of commerce) under the Brighton Chamber umbrella. Officials say although it has been a process, the merger was finally formalized as of May 2nd.

The Greater Brighton Area Chamber of Commerce also consists of the Pinckney-Putnam-Hamburg-Hell and Whitmore Lake Chambers of Commerce. With the recent merger, any member of any of the Chambers under the Brighton umbrella are members of all chambers. That is said to open up a wider opportunity for business growth and networking for all members. The Greater Brighton Area Chamber now consists of chambers of commerce within Livingston, Washtenaw and Oakland counties.

The Kensington Valley Chamber consists of South Lyon, Lyon Township, New Hudson and Salem Township. The Greater Brighton Area Chamber has members throughout southeast Michigan, but primarily in Livingston County. A press release states the organization, along with the addition of Kensington Valley Chamber, will serve approximately 1,000 members - with plenty of opportunity for growth according to officials.

The current staff of the Kensington Valley Chamber will remain onboard until the completion of their golf outing in June. The staff of the Greater Brighton Area Chamber is looking forward to assuming all duties after that time. Events are being organized to connect members of all four chambers.

It was also announced that Michelle Tokan has been hired as Division Director to work with all divisions of the Chamber and their events, and she brings extensive background in event management and marketing.