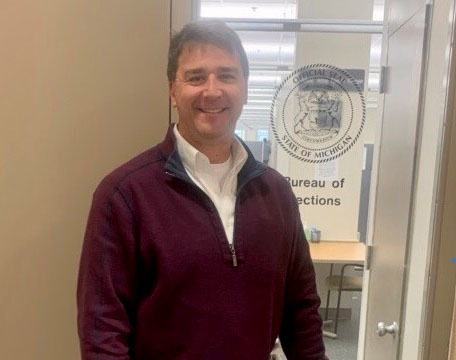 The 8th Congressional District now officially has one candidate on the ballot for the August primary.

On Wednesday, former Lansing-area TV news anchor Paul Junge filed 1,200 petition signatures to appear on the August 4th Republican primary ballot. Junge most recently served at the U.S. Citizenship and Immigration Services, but also previously worked as a prosecutor in a domestic violence unit in California. Junge said it was, “clearly a difficult time in our nation as we face a virus threat and economic hardship in the near term,” but that, “Americans are a resilient, caring, optimistic people” and he looked forward to, “helping Michigan families and job providers recover and defending the values we hold dear.”

A check of online records from the Michigan Secretary of State shows that Junge is the only candidate to have filed petitions for the primary. The deadline to do so is April 21st. Also running for the GOP nomination, but not yet filing, is Mike Detmer of Howell, Lansing-area attorney Kristina Lyke, state Board of Education member Nikki Snyder and Alan Hoover, a self-styled entrepreneur and former Marine from Ortonville. Whoever wins the primary will then face off against Democrat incumbent Elissa Slotkin in November.