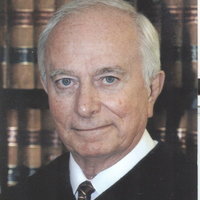 Stanley Latreille served 26 years on the Livingston County bench and retired in 2009 chief judge of the 44th Circuit Court. He passed away at home surrounded by family on January 2nd. Latreille was 82. It’s believed he had been diagnosed with pancreatic cancer and was in hospice recently. Retired Judge Daniel Burress spent time on the bench working alongside Latreille, who he says was a longtime jurist and it really was a calling for him. He says the passing is a loss to the community and his heart goes out to Latreille’s wife and children.

Funeral arrangements are being handled by MacDonald’s Funeral Home in Howell. Visitation will be held Tuesday, January 7th from 2-5pm and 6-8pm. A funeral mass will be held at St. Joseph Catholic Church on Wednesday, January 8th at 11am, with visitation from 10-11am at the church. Private burial will follow at Mt. Olivet Cemetery. Memorial contributions may be made to the Wounded Warrior Project.

A link to Latreille's obituary is provided. An interview with Latreille by WHMI's Jon King in April of 2009 that was videotaped for HUB-TV can be accessed here. (JM)