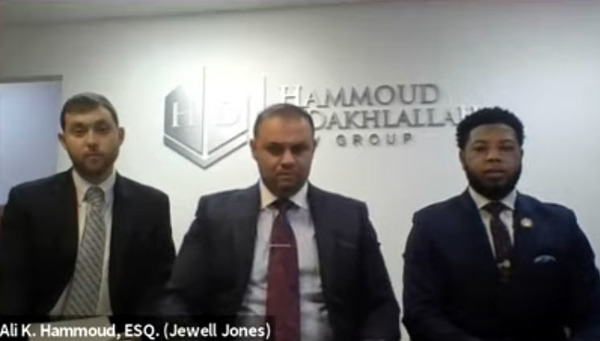 
Bond has been set for a State Representative from Wayne County who is facing multiple felony charges stemming from an event near Fowlerville earlier this month.

An arraignment hearing via Zoom was held Friday in 53rd District Court in Howell for Democratic State Representative Jewell Jones of Inkster. Aside from his position in the legislature, Jones is also a reserve officer for the Inkster Police Department and a member of the National Guard. He was arrested after Michigan State Police Troopers from the Brighton Post were dispatched to crash in a ditch on I-96 near Fowlerville on April 6th.

Motorists reported dangerous driving with one taking video of a vehicle matching Jones’ vehicle and license plate swerving in and out of traffic. The vehicle crashed into a ditch, requiring a passenger to receive treatment from paramedics. Jones, according to Assistant Prosecutor Carolyn Henry, allegedly became extremely uncooperative with paramedics, and then with police who were dispatched to the scene. She further alleged he attempted to use his status of importance with police as opposed to producing the requested identification. The scene escalated to where Jones was tased and pepper-sprayed.

Henry told Magistrate Jerry Sherwood that Jones, given his experience as a State Rep, an officer, and a member of the National Guard should know his choices on April 6th were unlawful and a danger to the community.

Jones’s attorney argued that the statements were mere allegations and that his client is presumed innocent. Magistrate Sherwood set a $15,000 bond, ordered Jones to undergo random drug and alcohol testing, and not to possess any weapons except for duties with the Michigan National Guard.

A probable cause conference in the case has been scheduled for April 27th in front of 53rd District Court Judge Daniel Bain.