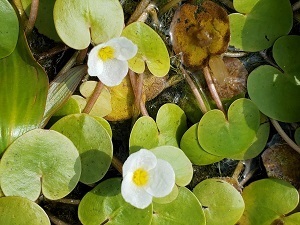 
An informational virtual meeting Wednesday night focused on a program to combat an invasive aquatic plant that has turned up in southwest Oakland County.

European frog-bit was discovered in 17 stormwater ponds, wetlands and drains in the Novi and Northville area. The free-floating plant has leathery heart-shaped leaves with three little white flower petals and looks like a miniature water lily. It can spread from the actual plants, seeds, and buds. As time goes on, European fog-bit spreads and becomes really dense

The Oakland County Cooperative Invasive Species Management Area or CISMA says early detection is key in fighting the invasive species and trying to prevent spread in inland water bodies. Thus, it is leading efforts with other groups including the Huron-River Watershed Council in Novi and surrounding areas such as Lyon Township, South Lyon, Milford and Wixom to survey residential and business properties with ponds and wetlands for free.

It was stated that so far the surveys have been encouraging as the invasive species has not been found outside of the originally identified areas. If it’s a small amount and caught early enough then the goal is eradication. A larger amount would involve managing it and preventing it from spreading throughout the county and into recreational lakes that include boating, fishing or duck hunting lakes.

CISMA Director Erica Clites said there is a very diverse Michigan “watch list” and they take newer species that have been introduced very seriously. She says the costs go up the longer something has been introduced and there are already multiple invasive species like zebra mussels that have been here long enough that they won’t be able to get rid of but can manage them. Clites said everyone has a role to play in helping eradicate invasive species before they get established.

Those in the identified areas with ponds, detention basins, or wetlands are encouraged to send in photos if they think the European frog-bit is present or request a field survey. Postcards were sent out late last year to private properties that include businesses or residences with ponds or wetlands by them explaining the survey project. Crews will survey the ponds and sometimes use an aquatic weed rake to remove submerged plants, and staff will confirm that they are not any of Michigan’s watch-list species.

More information is available through the provided link and attached release.