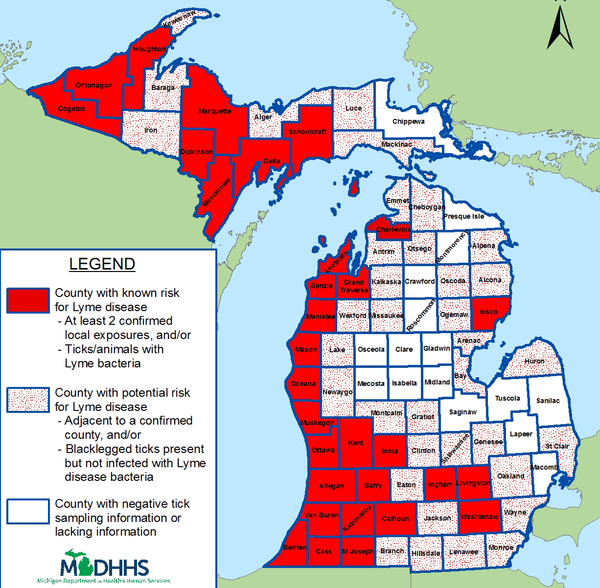 Livingston County has been labeled as a “known risk” for contracting Lyme disease, following confirmation that a deer tick in the area carried the disease-causing bacterium.

The case itself is from last summer, when a two-year-old was thought to have come into contact with the infected tick at a park in the Howell area. The child began showing symptoms and was treated by a pediatrician who also decided not to test the child for the disease.

Dr. Donald Lawrenchuk, medical director for the Livingston County Health Department, says the decision not to test the child means there was never a confirmed case, only that a deer tick was confirmed to have carried the bacterium that causes the disease. Because of that confirmation, the county is now considered to be in the "red zone", meaning it's possible to contract Lyme disease from an infected deer tick in Livingston County.

The county’s new “red zone” status appears on the 2018 Lyme disease risk map from the Michigan Department of Health and Human Services. The map’s legend depicts counties that either have negative or no information regarding tick sampling, as one with a potential risk or, like Livingston County, as an area with a known risk. Had the case been confirmed, it would’ve been the county’s first endemic case.

Among other known risk counties are Ingham and Washtenaw County. Lawrenchuk says their proximity means it was only a matter of time before the risk spread to Livingston County. Lawrenchuk says “prevention pays”, advising residents to be on the lookout for possibilities of infection and to conduct body examinations. If someone suspects they’ve been infected, Lawrenchuk recommends they contact their physician immediately for removal and treatment.