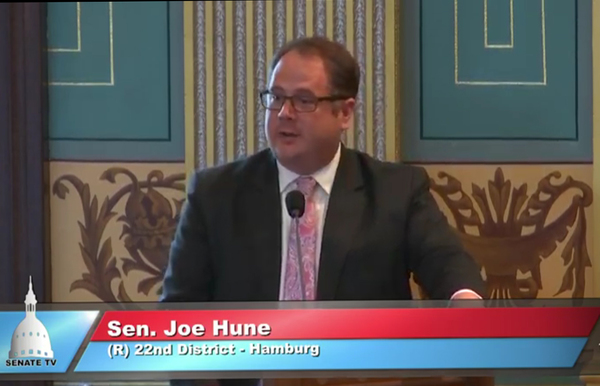 With family and friends looking on from the gallery, State Senator Joe Hune wrapped up his legislative career Thursday, offering final remarks on the Senate floor.

The Fowlerville-area Republican used his time to thank his wife, Marcia, as well as his parents and family for their support through his 14 years of service in Lansing. Hune began his career in 2002 after winning a Republican primary for State House by two votes, the closest margin in Livingston County history. He is term-limited from seeking another term after spending six years in the House and then being elected to the Michigan Senate in 2010 and serving two terms.

But Hune also took time to thank colleagues from both parties, saying the perception of Lansing often doesn’t match the reality. "The interesting thing about the public's perception of this town is that they think we all come together to come to Lansing and hate each other, but nothing could be further from the truth. Despite being a very conservative person, I've always befriended the Democrat leader. Diane Byrum is a dear friend. Governor-elect Whitmer, whom I shared Ingham County with, I consider a dear friend."

In honor of Hune’s career, the Senate unanimously adopted a resolution (posted below) recognizing his service in the House and Senate. Hune has yet to announce what his future plans are once his term ends December 31st. (JK)