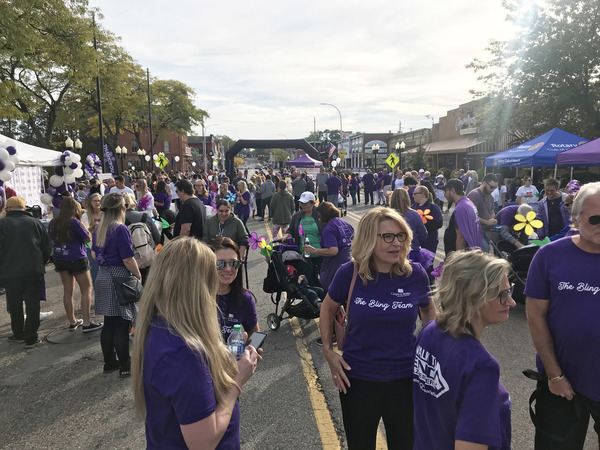 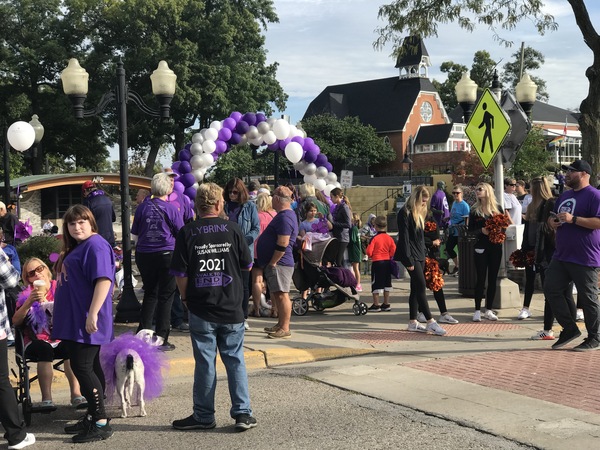 
On a beautiful Saturday morning in Downtown Brighton, nearly 700 people turned out to participate in the 11th annual Walk to End Alzheimer’s.

With Main Street closed down for the event, which returned after a virtual gathering last year, a sea of purple was lined up and ready to take part. The event’s co-chair was Barb Binkley, from Cooper & Binkley Jewelers, who shared her personal story of first her mother and then her father succumbing to the disease within a five-year period and just how much of an effect an event like the Walk to End Alzheimer’s has. “The disease not only impacts the person who has been diagnosed, it impacts their caregivers. It impacts those caregiver’s jobs and places of business and it impacts the community. When a community pulls together for an event like this it says so much. It’s so important for people to know that there’s a support network. It lets people know they are not alone and that there is a resource for education about this horrible disease.”

The event’s emcee was longtime media personality Chuck Gaidica, who also had a personal connection to share as he related how he lost both his mother and father-in-law to Alzheimer’s and dementia. Gaidica reminded those present that the money they were raising was all going toward a singular goal of finding a cure. “This is something that hits me, but if you look around at the crowd, you realize that this isn’t an old person’s disease. When you look at the families with strollers and families and friends and kids that are here, we are doing this for our loved ones, but we are doing this for ourselves and those of us who are our age in the future. And I’m convinced as the Alzheimer’s Association has said all along, I truly believe that the person who will be cured from Alzheimer’s disease is among us today.”

Gaidica also announced that the Brighton Walk to End Alzheimer’s was the top fundraising walk in Michigan, having blown past its fundraising goal of $157,500 and raising in excess of $188,000. The walkers, led by the Brighton High School pep band and pom squad, then made the trek down Main Street to Grand River to the Millpond Walkway, over the Tridge, and then back to Main Street. Dozens of local retailers also made various specials and other giveaways available for walkers to take advantage of after they had completed the walk.

The top individual fundraiser for the event was Carole Jones, who raised $11,500 in memory of her husband Bob, who passed away in 2018 from Alzheimer's. Jones was given recognition just prior to the walk. (bottom photo)

Fundraising for this year’s goal will continue through the end of the year and you’ll find that link by Clicking Here.