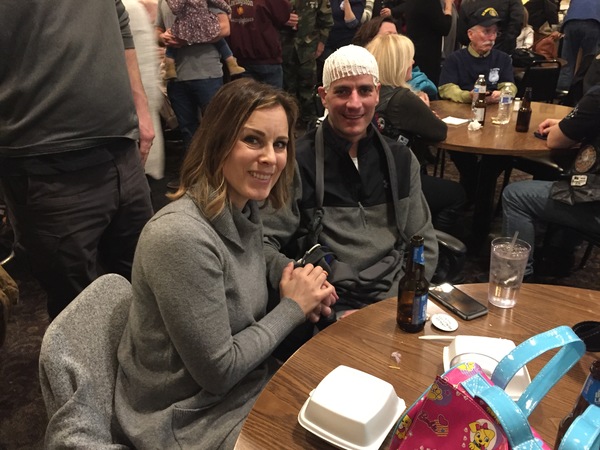 A fundraiser for a local veteran with brain cancer had an even bigger turnout than expected, with over 1,000 people estimated to have contributed.

Wednesday’s event raised funds for Howell resident Dave Imber, who is both a veteran and a police officer and has been diagnosed with Glioblastoma, an aggressive brain tumor considered to be a rare cancer with a poor prognosis.

The American Legion Post 141 in Howell was packed with community members who came to support Imber and his family, with attendees filling the upstairs and downstairs levels of the building. While roughly 500 guests purchased a meal supporting the fundraiser, event organizers say hundreds more stopped by just to drop off a donation. Organizers say a rough estimate would be that a total of over 1,000 people contributed to the fundraiser the night of. Contributions also include the food that was donated and the building where it took place, which was donated by the Legion.

The gathering raised money to help with medical costs that have put Imber, his wife Julie and their two daughters, ages four and 14, in a difficult place financially while Imber is unable to work. Julie tells WHMI they’ve experienced a lot of stress lately as she is the only one who is able to work. Julie says things have been difficult and will be in the future, especially for their daughters. She says the overwhelming turnout made she and her husband emotional, adding that they both cried all night knowing so many people support them. Imber repeatedly expressed his gratitude, saying that it was awesome to see so many good-hearted people that care come out to help him and his family.

Imber began his career in the army when he joined in 2005 at the age of 24. He spent the next six years serving his country, including a tour in Iraq. After he and Julie were married in 2010, he worked as a corrections officer in Livingston County. In 2017, he joined the Lathrup Village Police Department in Oakland County. (DK)