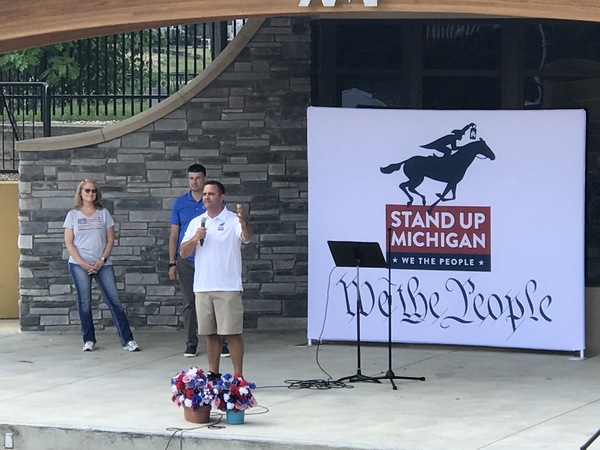 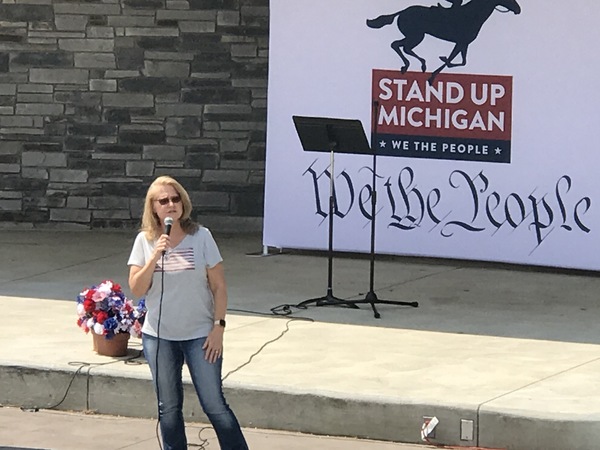 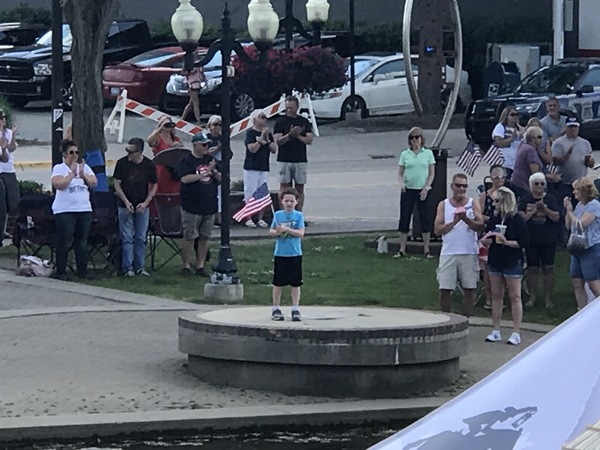 
A political activist group hosted an event Friday in Brighton that rallied hundreds of people to oppose Michigan’s stay-at-home order.

Stand Up Michigan hosted the Freedom Fest at the Brighton Mill Pond with music, speakers and memorabilia for sale. The group was formed after organizer Garrett Soldano’s Facebook page called “Michiganders Against Excessive Quarantine,” was removed for violating the social media company’s Community Standards, reportedly for spreading COVID-19 misinformation, but also for reported threats made against Gov. Whitmer by some of the group’s 380,000 members.

Soldano was at Friday’s event in Brighton, telling the crowd that it was time for the silent majority to speak up for what he believes were illegal actions by Gov. Whitmer in issuing executive orders to try and combat the spread of coronavirus. Soldano, a former NFL linebacker turned- entrepreneur, has drawn criticism for his advocacy of JuicePlus, for which he is the national marketing director. After Soldano claimed the juice can “dominate” COVID-19, the company issued a statement backing away from the claim. Soldano has also called the coronavirus a “glorified flu," a position that is contrary to scientific evidence. He urged the crowd, very few of whom were wearing masks or practicing social distancing, to become active with Stand Up Michigan and help to get a referendum passed that would repeal the 1945 law that allows Whitmer to continue issuing emergency declarations without legislative approval.

Also speaking at Freedom Fest was State Senator Lana Theis. The Brighton Township Republican began her remarks by saying that while COVID-19 was a real health threat, it had been overemphasized in comparison to other risks like suicide and depression in the governor’s emergency orders. "Does this feel like an emergency to you right now? We need to speak up because the voices are still silent. If we're not locked at home, we're not worried about it? Our Founding Fathers died so that we could have the branchs of government that we have so we could have a balance of power so that 'We The People' could be heard in the halls of government and we need you to stand up and speak and I want to thank you for doing that here."

One of those attending the event was Stephanie from the Fenton-Hartland area, who said she came out to support the efforts at curbing the governor’s executive powers. "I would really very much like to see these Constitutional rights enforced, and if that means we need to take a look at changing laws or amending them in some way I'm excited to see that process move forward."

The criticism of Whitmer’s stay-at-home order and other executive actions come despite research that indicates Michigan, more than any other Great Lakes state, saw decreased mobility among the populace, which in turn helped stem the spread of the virus. A link to the study, by researchers at the Imperial College London and Oxford University, is below.

The Brighton event was the second in a series of gatherings by Stand Up Michigan. The first was held in Newaygo last month while the stay-at-home order was still in effect. Officials with the City of Newaygo said they didn’t support the gathering and advised businesses to seek guidance from the local, state and federal health officials.