Hundreds Gather In Brighton To Ally Against Racial Injustice 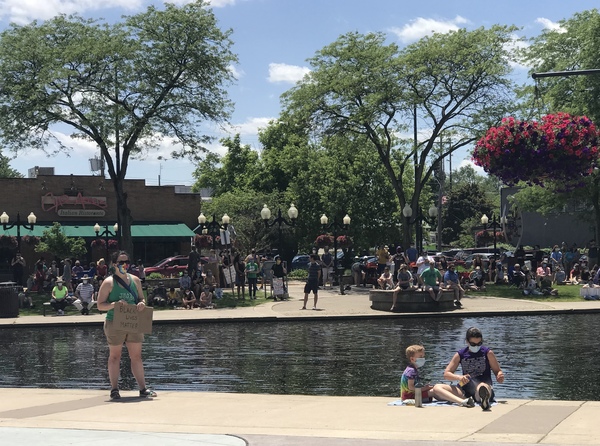 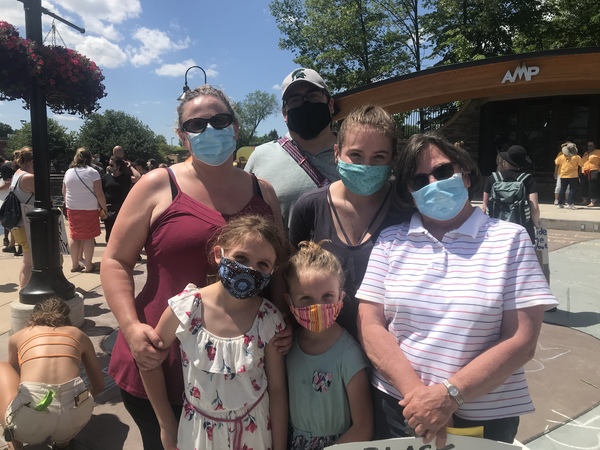 
Following Thursday’s protests in Howell and Brighton against police brutality in the wake of the killing of George Floyd, a gathering Saturday in Brighton was more focused on providing residents with information about the underlying issues involving racism and how they can help to fight it.

Floyd died after a Minneapolis police officer placed a knee on his neck for several minutes on Memorial Day. His death has resulted in protests around the world against police brutality and racism.

Several hundred people turned out in the hot mid-day sun for the event called Brighton Allies for Racial Justice, held at Brighton’s Mill Pond and organized by Brighton resident Jessica Garcia, who serves as the Diversity, Equity, and Inclusion (DEI) Manager for the College of Literature, Science, and the Arts at the University of Michigan. She is also the Founder and CEO of Hummingbird Solutions, LLC, “a diversity and inclusion consulting firm.”

Garcia said that just four days ago she had very few friends in Brighton, but had connected with many people since organizing the event, including several residents of color who shared their experiences living in Brighton. Those stories include, “being Racially profiled; neighbors yelling racist chants loud enough to intimidate; feeling unsafe; being harassed and followed at local businesses; having had negative experiences with our school system; children who have lost friends because those friends weren’t allowed to play with them anymore; having their residency questioned; being stared at in town; being complimented for speaking “good English” even though they were born in Michigan; and friends afraid to move here because of the reputation.” Garcia said the common theme was that “our residents of color are exhausted. It is exhausting to face this, or worry about facing this, every time they leave the house.”

She then read aloud a statement from one of those residents, Alison, who said she has been a Brighton resident for the last 20 years. Born in Colombia, Alison was adopted and raised by a Jewish couple living in New Jersey, who later moved to Ann Arbor. After attending college at Eastern Michigan University and the University of Michigan, Alison said she moved to Brighton after getting married. She said her friends were shocked that she was moving to Livingston County. “Growing up we had all heard the stories about Livingston County being “KKK territory”. Why would I want to leave the warm cozy bubble that is Ann Arbor, and move out here? Simple answer, the cost of housing. I figured things HAD to have changed since I had been in high school. There couldn’t possibly be people who would treat me differently because of the color of my skin. That’s what growing up in the “Ann Arbor bubble” does to you, you think EVERYONE loves EVERYONE.” But she said that after moving to Brighton she “definitely got some stares” and that after 9/11 a man at a gas station told her to “go home.” She related an incident “at an ice cream place just outside of Pinckney” when she and her dark-complected daughter were refused permission to use a bathroom, while her Caucasian friend with blonde hair and her child were immediately given the keys. Alison said she was embarrassed and hurt and didn’t know what to say, until her mother confronted the clerk, which led to Alison’s family and that of her friends leaving the store, vowing never to return. Alison said the tears she had that day were two-fold; thankful for the support of her mother and friends, but also because she felt like she had let her daughter down by not speaking up. Alison said she promised herself that from that point on she would always speak up against hate and ignorance. “I won’t speak for anyone else but I know that when I see people calling out hate on social media, when I see friends sharing links on how to be a better ally, I finally feel like I belong in this community.”

The Rev. Julie Brock from the Community Unitarian Universalists also spoke, telling the crowd that they were not there to pat themselves on the back for being decent human beings, but to make change happen. “If we came out here today to assuage white feelings and then we’re going to go home and say, ‘Okay, we did that. I don’t have to feel guilty anymore.’ Then we shouldn’t have had this event. But I can tell by your signs and your cheers that’s that is not what we came here to do today, right? We came here to build our power because oppression cedes nothing without a demand.”

The crowd was made up all ages, including the three generations of the Shrier family of Brighton Township. Maggie Shrier was there with her son Rob, daughter-in-law Carrie and her three grandchildren; 16-year-old Avery, 9-year-old Ellery and 7-year-old Olivia. She said the time to be passive on these issues was long past. “You don’t have to be obnoxious about it or be a jerk, but just to stand up and say I feel this is important and I’m not going to be quiet any longer.”

Carrie Shrier said it was important to be at the event and bring her children, “because if we’re going to make change here in Livingston County it’s got to start with our youngest kids. I grew up here and am very pleased to see this many people coming out to impact change in our community.” Her daughter Avery echoed that sentiment; “I think it’s really nice that this many people have come out from so many places in Livingston County because it’s really important that we start to work for racial equality.” Avery said the fact that she hadn’t ever personally witnessed racism was not the point of the gathering. “Not really, because most of my school and our town is very white. But online and through that kind of thing I have seen a lot of that and it’s just not right. It needs to stop.”

Also present was 19-year-old Rebecca Chan of Genoa Township, who said the turnout was nice to see and hoped that action would result. Her main issue is police reform, telling WHMI “I think the law enforcement in this country, not only does it not help black and brown communities, I think it is actively harming black and brown communities in the country and I think it’s almost unfair how much we expect from the police department. There’s not enough funding and mental health resources. There’s not enough funding in drug prevention rehabilitation programs. So a lot of that responsibility then falls on the police who often aren’t adequately trained to deal with a lot of those nuanced situations.” Chan continued, “What we need to do is start divesting money away from the police and into more programs that can better help people in a productive and sustainable way so that instead sort of reinforcing the cycle of incarceration, we can start to help people become productive members of society.” In the end, Chan says George Floyd’s death, “was able to happen because of a police force that has too much authority and too much power in our society. Of course we need more training for our police force, implicit bias training and all of that kind of stuff. But as we can move toward a society that is more nurturing and holistic as opposed to punitive in the way it deals with infractions we can avoid cases like George Floyd’s.”

Once the event ended, Garcia said the next step was to continue the conversation. “I hope people feel empowered to start taking their own steps.” said Garcia. “They recognize they’re not alone. They recognize their role in this. The other part is I hope to capitalize on this energy, and so having additional meetings going forward where this maybe becomes a community group as opposed to an event.”