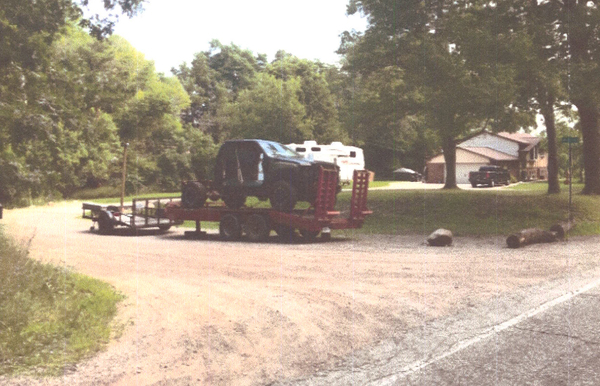 
A dispute between neighbors has Howell Township officials exploring their zoning ordinance in relation to private roads.

Tim Boal lives on Santa Rosa Drive. In February, Boal was appointed to the Howell Township Zoning Board of Appeals. During that meeting he asked the ZBA to clarify on 3 sections of the township’s zoning ordinance, centered around a construction trailer that was parked in the right-of-way. Boal asked for clarification on the outdoor parking and storage of this vehicle, visibility at the intersection, and off-street parking requirements. He recused himself from the discussion, and the remaining ZBA members judged that because it was a private road, their ordinance didn’t apply.

Boal disagreed with this, and on September 30th issued a letter to the Board of Trustees and Zoning Administrator. He claims that after legal consultation, he has found several violations of the ordinance that should be in effect, and by not being enforced, have allowed safety concerns to remain. Boal wrote that there are numerous conditions on private roads in the ordinance, and wondered why some portions would apply while others don’t. In his letter he called not enforcing the ordinance a willful neglect of duty.

During public comment period at the Howell Township Board of Trustee’s meeting Monday, Shane Fagan, also of Santa Rosa Drive, suggested that Boal was making a bigger deal of this than what actually exists. Fagan said he has not been inconvenienced by the roadside parking, to which he claimed all residents of the drive “seem to enjoy and participate in.” He argued that vehicles parked on the side of the road have actually made it safer as mail and delivery trucks are more forced to slow down, and that he doesn’t have to worry about his kids riding bikes on their drive. He said, in his experience, that regardless of what’s parked there, you can get in and out, sometimes two cars at a time. Fagan said he’d like to be able to continuing using his property, and would hate to not be able to park on it because of one guy’s vendetta towards a neighbor.

Boal wrote disappointment in the struggle he’s had with the township in getting these laws enforced and having to take these measures. He asked why they would have laws and ordinances if they weren’t going to be enforced. Boal continued in his letter that should any of his family suffer damages, an injury, or death because of non-enforcement of the ordinance, that he will pursue all possible legal action.

The Board of Trustees took no action.