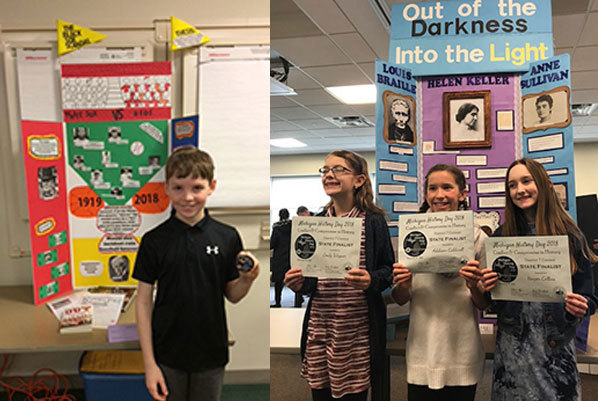 The Michigan History Day state finals will be well represented by local students.

Four 5th grade students from Three Fires Elementary in Howell have qualified for the event after claiming one of the top 3 spots in their category and age group at districts. The Michigan History Day is a year-long educational program where students from 4th through 12th grade pick a historical topic based on an annual theme to research and create a showcase for at the competition.

This year’s theme was “Conflict and Compromise in History.” The trio of Addison Caldwell, Harper Collins, and Emily Wagner created an exhibit titled, “Out of the Darkness, Into the Light,” about Helen Keller, Anne Sullivan and Louis Braille. The fourth finalist is Duncan Gary. Gary created an individual exhibit based on the infamous Black Sox Scandal which involved baseball players fixing games during the 1919 World Series. The quartet of students will next be on their way to Bay City to participate in the finals, being held on Saturday, April 28th. (MK)