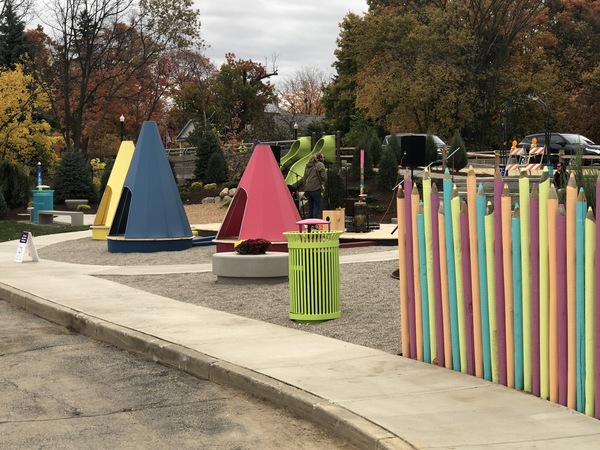 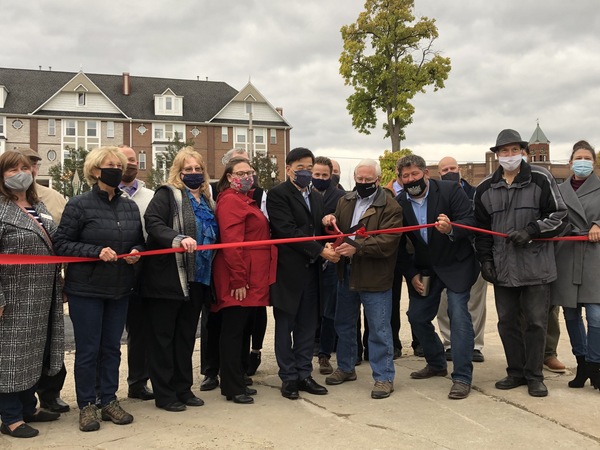 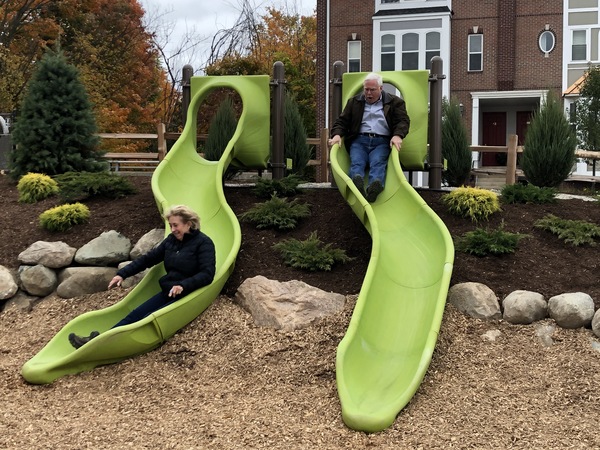 
The ribbon has been cut on a new, magical gathering space in the City of Howell.

Howell Summit Gardens, located adjacent to the Depot Parking Lot off of Michigan Avenue, north of Grand River is now open to families and visitors. What began as an idea roughly 5 years ago culminated at Thursday evening’s event attended by Howell City officials, staff, and dozens of community stakeholders.

Coming from the Depot Lot, Howell Summit Gardens appears to have 3 teepees for children to play around. But approaching from the Michigan Avenue entrance, those teepees reveal themselves to be “gnome hats,” belonging to 3 gnomes sitting on the ground, whose bodies make up a performance stage with amphitheater seating provided. The gathering space also has 2 slides; stone, all-weather cornhole, ping pong and checker board tables; a wooden labyrinth, a fence made out of giant “colored pencils,” and picnic tables.

The “whimsical” garden park, which Downtown Development Authority Director Kate Litwin noted “is not a park, but a gathering space,” came to be largely through the help of a Kaboom grant and a $100,000 donation from Thai Summit. As the project progressed, several local businesses also got involved, donating man power and materials, or providing them at or below cost. If the project had been bid out, it could have cost between $300,000 and $400,000. Thanks to community support, it was able to be built for $130,000.

Dr. Woody Iddhibhakdibongse is one of the highest ranking officials at Thai Summit, whose North American headquarters is in Howell. He spoke about how they thought they were coming to the city for just one year in 2012, but have now been here eight, and his family now considers themselves to be citizens of Howell.

Mayor Nick Proctor thanked Dr. Woody and all the local businesses that chipped in, noting that no property tax money was spent on the project.

Mona Shand, representing Congresswoman Elissa Slotkin at the event, called it a “wonderful accomplishment in the worst circumstances” that 2020 has put on everyone.

DPS Director Erv Suida said he couldn’t be more proud of the community or his staff and how this was about everybody giving a little bit for the better of the community. He noted how hard DPS workers worked to make this day possible, with many coming to the site to put in extra time in between regular appointments, when possible.

Litwin showed appreciation for all who contributed, saying they had to convince a lot of people, but mostly had to convince the DPW and DPS. She joked on how “they kinda had to turn in their man cards and go with the whimsy. And I know it hasn’t been the easiest and you’ve looked at me like I have horns growing out of my head, but what we’ve created is something very, very special.”