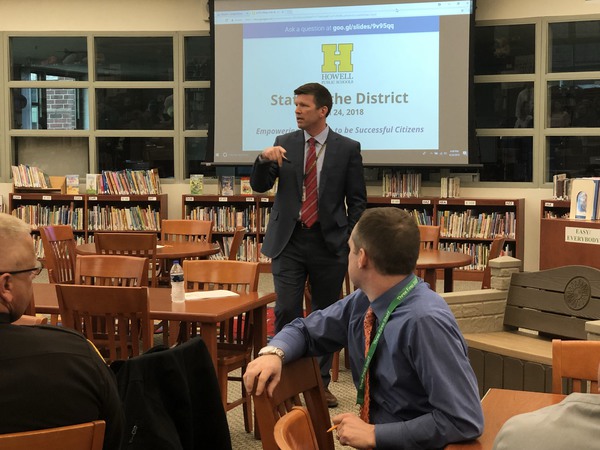 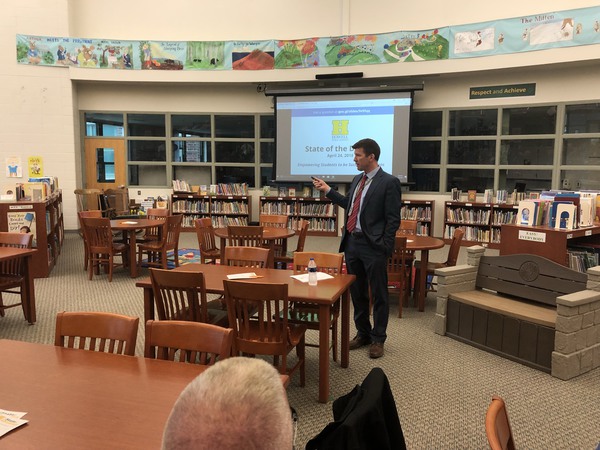 The Superintendent of Howell Public Schools delivered his yearly State of the District address to educators, community leaders, and the public Tuesday night.

Three Fires Elementary was the site Tuesday night, for this, the third of Superintendent Erin MacGregor’s addresses since taking over as head of the school district. His goal was to present a 30-thousand foot view of how things are going within Howell schools.

MacGregor said he was proud of the way the district has taken to the Adaptive Plan they’ve created. He recognized the need, and successes of building systems that support the kids, while being fluid enough to be able to make changes as necessary. MacGregor said it’s more important than ever to prepare students with a wide range of tools to succeed. He said he saw a study that showed that students who are currently enrolled in elementary school will graduate and enter jobs, and that 65% of those jobs they’ll enter into don’t exist as of today. He said that for them to claim to know what they are preparing students for with specific jobs is not being authentic with them. MacGregor said his focus is finding how to provide students with a skill set to walk into any situation over potentially many jobs in their life and say, “…because I’m adaptive, because I can solve problems and think critically on things, because of what Howell schools did for me, I can be successful in whatever situation I’m in.”

Some positives within the district are the expansion of the early college programs, commendable GPAs from student-athletes and burgeoning robotics and performance arts programming. Money gained by the Technology Bond passed almost 3 years ago has been spent on upgrading internet infrastructure and classrooms. Reading growth is trending upwards, as is the number of graduates enrolling in in college.
Looking forward, the superintendent said he was excited for a new fall programs. One is a book bus that will be travelling the district this summer, loaded with books to help those who might have a hard time getting to a library or gaining access to reading materials during the summer. Another is the Little Highlanders Learning Center that will offer a higher quality preschool education, launching this fall. Also starting in fall is the Innovation Academy, which is looking to help high school students who have had struggles and provide them an environment within which they can succeed.

The district is in good shape financially with an unassigned fund balance of 11.1%. MacGregor said the state requires that number to be at least 5% to not be put on a watch list, and so Howell Public Schools is in good shape. While enrollment is down in Howell and across similar districts in the county and in size, the superintendent said kids entering kindergarten has been increasing since 2015.

MacGregor said that while the state of the district is strong, they are always looking for areas to improve in. He pointed at 25% of students affected by poverty, and the 10% of kids who’ve been absent 10% of the year or more as two such areas. (MK)