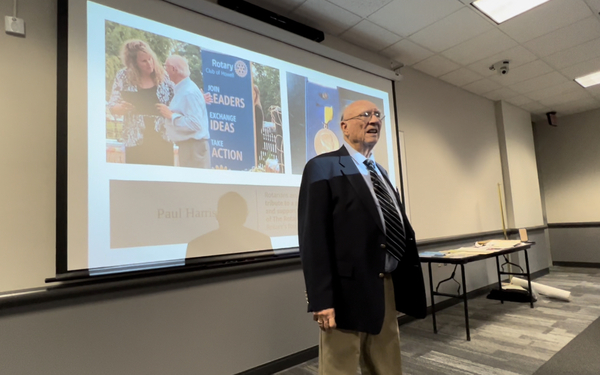 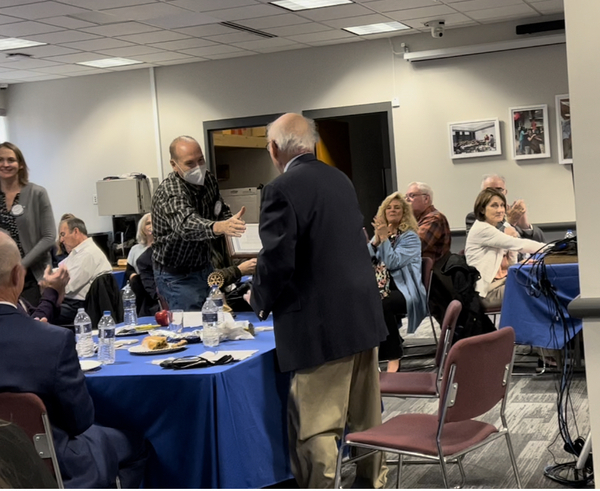 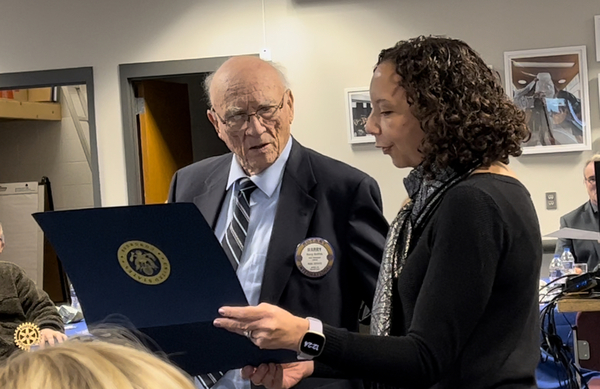 
A Howell man’s more than six decades of community service was recognized in a celebration today, although it was a surprise to him.

When 91-year-old Harry Griffith became a Howell Rotary Member in 1955, Dwight D. Eisenhower was the President of the United States. 66 years later he was honored at the group’s meeting. Ironically, Griffith was scheduled to give a presentation on the History of Howell Rotary, but to everyone who turned out, Griffith is the living embodiment of not only that organization, but the community itself.

Also in attendance was Harry’s daughter and fellow Howell Rotarian, Livingston County Commissioner Carol Griffith, who represents the third generation of the family to belong to the organization as Harry’s father-in-law, Harold Crandall, was also a member. Carol Griffith said that service was just part of the family. "It was. I think he really wears 'service above self' on his sleeve and it was something we just kind of followed in his footsteps in and we appreciated how to give back to the community and that all come, probably from a family tradition that began with my grandfather and my dad." Harry’s son, Scott Griffith, is a member and Past President of the Brighton Rotary and was also present.

For his presentation, Harry Griffith spoke about the changes in the club through the years, most notably the addition of women in 1989, which he jokingly said had gone better than anyone expected, but seriously noted that the club had had “some great women members” through the years. He also reminisced about past traditions like wearing ugly Christmas ties and swapping them with fellow members. But he was most proud of what Rotary had accomplished through the years, saying it had allowed him, a real estate agent in Howell, to have an impact globally, referencing the Rotary International fight against polio.

Afterward, he told WHMI that awards and recognition were totally unexpected. "This was a complete surprise, a complete shock, and then to have my son and daughter and grandson and granddaughter here. But all of the awards, I had no idea that that was going to happen. No hint about it. I think they're very gracious."

Howell Mayor Bob Ellis and the Rotary District’s Governor made presentations to him marking the milestone, as well as the Office of Congresswoman Elissa Slotkin.

Harry Griffith was twice a Paul Harris Fellow and served one stint as Howell Rotary President in 1959. In fact, both of his children and his father-in-law also served as Harris Fellows and Presidents of their respective Rotary groups.

Harry worked alongside his father-in-law at Crandall Realty, which was established in 1924. Carol Griffith said that building is one of the oldest in Howell and also served as the house in which her mother, Mary Crandall Griffith, grew up. Carol Griffith said her father’s family owned a taxi and ice cream shop where the Howell Theater is located today. “He lived upstairs during his college years at MSU coming home on the weekend to drive a taxi for the family.”

To say that Harry Griffith, who also retired from the U.S. Air Force as a Captain, has given a lifetime of service to the community is really to understate his impact. Through the years, he has served as the President of Howell Chamber of Commerce, Chairman of the United Way; which was called Community Chest during his leadership; he was a Director with 1st National Bank of Howell, a Board member with the Howell Carnegie District Library and Past Chairman of the Genoa Township Zoning Board.

Among his other accomplishments;