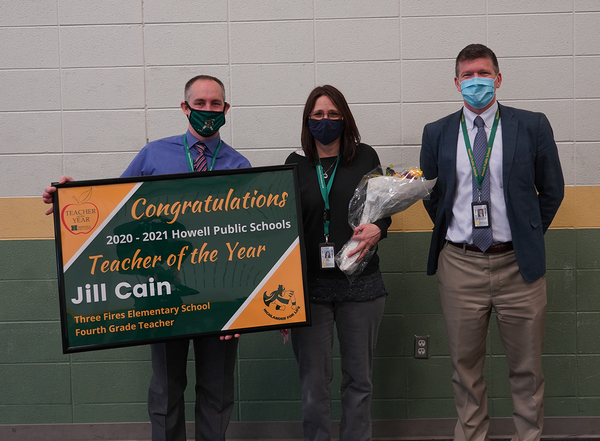 
An educator known for her innovative methods and caring nature has been named Howell Public Schools 2020-2021 Teacher of the Year.

Three Fires Elementary 4th Grade Teacher Jill Cain was surprised with the award by Superintendent Erin MacGregor and Three Fires Principal Bob Starkey. Cain has been teaching at Howell Public Schools for 18 years. Cain's husband was also present for the surprise. Cain said “I am humbled and have been influenced by the staff that I am a part of. I’ve always strived to do my best to help accomplish a team goal. It sounds cliché but it really takes a community. I am a small part of a great one. In my experience, children want simple things in life. To be loved, accepted, and heard. That’s the easy part for me. I can do that and hopefully inspire them to do their best along the way.”

Cain received several nominations for the award from both parents and colleagues, which highlighted her caring nature and willingness to go the extra mile to support all students. The nominations noted that while Cain is currently teaching fourth grade, she is a technology teacher at heart. A press release noted that Cain began integrating STEAM concepts into her lessons several years ago - well before it was a national trend. STEAM stands for Science, Technology, Engineering, the Arts, and Math.

A committee of 26 district stakeholders was tasked with selecting this year's Teacher of the Year. Out of the 81 teachers nominated, Cain emerged as this year's winner. She will now represent Howell Public Schools in the Michigan Teacher of the Year competition. The Board of Education will honor Cain at its March meeting.

More information is available in the attached press release.