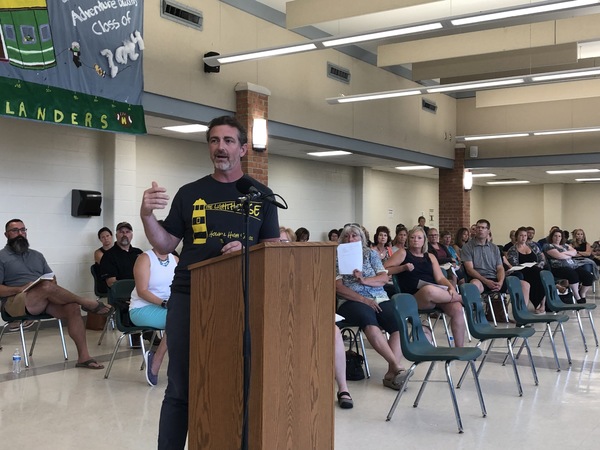 
A student-led drive to bring greater mental and emotional health support to their peers has been met with support and opposition from parents and the community.

The Howell High School Lighthouse group is a student mental health team that promotes wellness among their classmates. Before the pandemic began, sensing some distress within the student body, they went through the proper channels to propose new curriculum be added in Health Education. A report supporting it was given by district staff at Monday’s Board of Education meeting.

Up for future approval is a change in the description of Health Education to include: “mental and emotional health including mental health disorders, depression, anxiety, suicide prevention, gender identity and LGBTQ+" as well as "the impact of technology on mental health and cyberbullying.” The parameters would be that it be specific to mental health risks and supports, and the inclusion of a parent cover letter.

Howell Public Schools’ Superintendent Erin MacGregor said it’s not unheard of for students to show this kind of initiative, but it is atypical. He said they want their students to have a voice, and he is proud of them for working through the process in the right way. The proposed change went through several meetings with multiple committees and subcommittees before making it to the Board of Education.

High School Principal Jason Schrock and Executive Director of Instructional Services, Elson Liu, delivered a statistic and survey focused report. HPS statistics for a self-reporting surveying of students in 2018 revealed that 17% seriously considered suicide with 5.8% having attempted it in the past 12 months. 9.1% of students identified as gay, lesbian or trans. Roughly one-quarter of high school students had read emails or online messages with rumors of other students, with 14.8% reading those with threats in them. These numbers were shown to be consistent with county averages. Parents in the district were surveyed on questions regarding which grade, if any, would it be acceptable to teach students about topics like gender identity, sexual orientation, and treating all students with respect no matter where they are with that. The majority of responses fell in the middle school grade range. Seven percent of surveys sent out were completed and returned. Though that falls within the district’s average response rate, some opponents of the curriculum believe it is too small of a sample size.

During public comment, opinions on the curriculum were fairly evenly represented.

Howell High School senior Sara Reader is a member of the LGBTQ+ community and shared her story of 3 attempted suicides as a freshman because, in part, she believed she was not accepted for who she was. She said she isolated herself from everyone and did not feel comfortable expressing who she was in any way, shape or form. Reader said she took the current health class program and that its knowledge on mental health and suicide prevention was not enough to help her.

Kasey Leigh Hilton, who teaches in the Ann Arbor Public School district, asked the Board to vote yes, saying she wished it was offered when she was a student in Howell. She said the class could give students a safe place to talk that isn’t at home, and asked the Board to give the students what they themselves are asking for.

Several others also supported the curriculum and felt it would be valuable for teaching students empathy and respect that will go with them into the post-high school world.

On the other side were several parents who felt this is the type of material that should be taught by parents at home and has no place in school. As with current Health classes, students could opt-out in favor of other approved routes for completing their graduation requirements. Many at the Board felt that if the curriculum were to be installed, it should be an opt-in, or an elective. Jenny Johnson agreed saying she strongly feels this should be an opt-in, not opt-out course. She said it should be taught at home, by the parents, just like “accepting everyone” should be. Johnson said math, reading and writing is what belongs in the schools, “not this.”

Multiple people during public comment spoke to the removal of God from public schools and suggested bringing Him, or at least prayer time, back would solve a lot of these issues.

Opponents felt the Board was creating curriculum for the “smaller number” and not the masses. Danyelle Anjo said that LGBT kids should absolutely be protected, but also that all kids should be as well. She said adults are getting bullied over their opinions that she has collected 274 signatures of people opposed to this. Anjo also said that people have no clue what’s actually inside this curriculum.

MacGregor said they have state standards and Board standards for courses. What the Board doesn’t do is approve each lesson for all of their hundreds of teachers. Teachers are trusted to implement curriculum to the district’s standards. MacGregor said the proposed standards will be available before the Board votes, but individual lessons aren’t necessarily something that is going to be. Teachers that would be affected were implied to be waiting on the curriculum vote to see if they need to begin putting the district’s standards in action or not.

During the second call to the public, Reader refuted many of the points that came from those opposed to the curriculum, with support. Livingston Diversity Council President Nicole Matthews-Creech spoke and claimed that according to a 2018 youth report, 78% of LGBTQ youth are not out to their parents. She said the majority report having trouble sleeping, have felt down or depressed, and hear the negative comments about the community. Matthews-Creech said this shows how students are supported at home. She said it is important that kids feel safe at school and at home, and for some, school is their only refuge. Reader said, “We left it up to the parents and they failed.” She said she wasn’t taught mental health or diversity from them, and that this can’t be left to parents to teach. Reader said they need to look at the students and what the students need- “not just the old beliefs.” She added that if the course is made an elective, no one will take it.

No action was taken Monday, as only the staff report was on the agenda. The Superintendent said the vote could come as early as the Board of Education’s July 12th meeting, but that as of Monday night, it was not on that agenda.