Howell Board Of Education Approves Return To School Plan 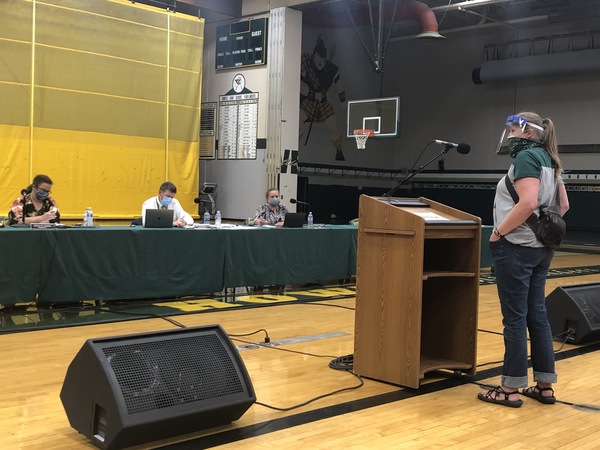 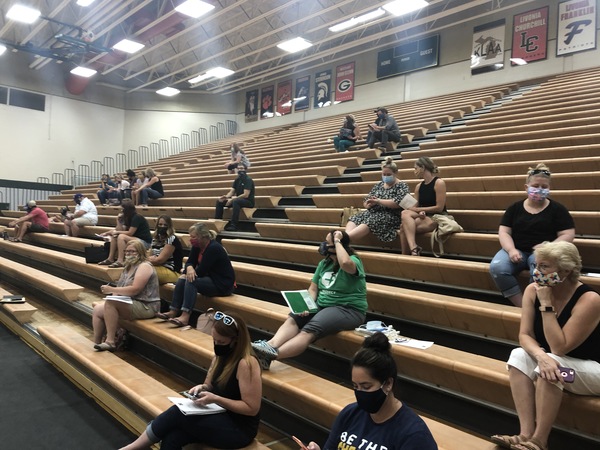 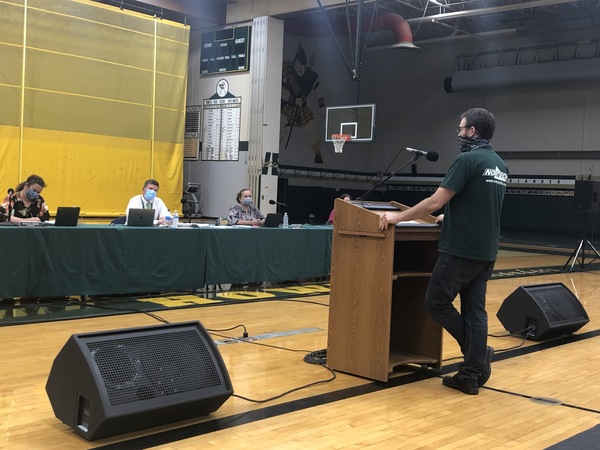 
The Howell Public Schools Board of Education has approved its COVID 19- Preparedness and Response Plan, allowing kids the opportunity to return to school.

Using the roadmap provided by Governor Gretchen Whitmer’s office with requirements and strong recommendations, every district in the state must approve a multi-phase plan for what education will look like in the upcoming school year. These plans must be approved at least a week ahead of the first day of school. On Monday, the HPS Board considered the latest draft presented by Superintendent Erin Macgregor, 16 days in front of students returning.

Roughly 50 people attended the meeting held in the high school field house. Several teachers and parents took the opportunity to speak during both public comment periods, with most voicing frustration with the district’s plan. Many still voiced a desire to return to in-person learning, but felt that it wasn’t yet safe to. The issue that took center stage ended up being the lack of a firm requirement for elementary school students to wear facial coverings. With social distancing in classrooms being difficult at best, many thought having kids wear masks would lead to a safer environment. A couple argued that even if they are kept together in their classrooms, there is no separation on bus transportation before and after school, nullifying any cohorting advantage.

The Board held a lengthy discussion after one member motioned to amend the wording in the final draft. Courtney Tarara offered that young students “may be required” to wear facial coverings when in close proximity, be changed to “shall be required.” Both wordings failed to pass in motion, and the original was put up for reconsideration. The Board felt that “may be required” kept more power in the teacher’s discretion, and passed the plan as originally presented by a 6-1 vote. Tarara said the intention of her original amendment was meant more for students meeting 1-on-1 with teachers or when sitting in small groups on the carpet, together.


During the second public comment period following the vote, HPS Teacher Lisa Cane and accused the Board of avoiding responsibility. She said with “may” or “shall” that teachers don’t want to be the ones to make that decision, because when they do, it is the parents of their students that “tear us to shreds.” She said, “You are our Board. You should be the ones standing strong for us, providing a safe environment for us, and explaining to the parents why and how you’re going to keep us safe.”

MacGregor said he understands there is disagreement, but that he believes very strongly that they’ve taken into consideration how to mitigate the risks as best as possible. He felt it also important to speak for a side that wasn’t well represented at Monday night’s meeting. MacGregor said, “What’s not been put forth and elevated enough, is that we’ve had students home since March 12th who have social emotional needs, who have academic needs, who have nutritional needs that are not being met. And to continue to not provide that is not a fair part of this conversation. That does not mean that we separate or set aside the risk of COVID-19, but I think that needs to be a part of the conversation. And if I’m given the opportunity to take a roadmap that says we can bring our kids back, then I’m going to take that opportunity to work with our team and put a plan together to do that.” He continued, saying that they have some kids where the only stable place they have is school. MacGregor said “..and so if I’m able to provide an opportunity for those kids to get back top that stable environment, I’m gonna do that. I understand there’s disagreement with that, but I feel very strongly with the need to do that.”

Board members, during their Board Comments section at the end of the meeting, also took exception to accusations that their decisions were political, done for tax reasons, and they were using district families as part of an experiment.

For parents and students not comfortable to returning in-person, the remote Highlander Virtual program is still an option. MacGregor said that roughly 15% of the district’s 6,900 students have signed up for the program.

Howell students are scheduled to return online and in-person, on August 19th.

For more information, a copy of the Plan, and options for families this fall, visit howellschools.com/services/communications/return_to_school