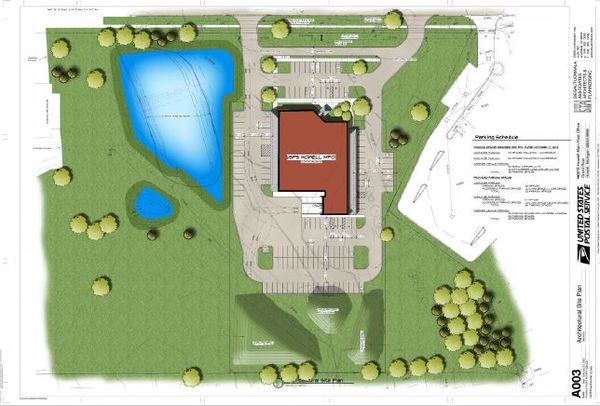 
Plans to relocate the Howell Post Office appear to be in limbo after Monday night’s Howell City Council meeting.

City Council met Monday night and held a lengthy two hour discussion on proposed plans from the United States Postal Service but ended in a split vote. The main Howell Post Office is located downtown in a residential neighborhood at 325 South Michigan Avenue. The USPS has outgrown the current facility and wants to acquire a city-owned site adjacent to the main Howell Fire Station on Grand River totaling roughly 2.6 acres for a proposed 17,881-squre-foot-facility. Representatives from the Post Office attended the meeting, along with the project architect. After a two hour discussion to clarify the project needs and address resident concerns, Council voted 3-3 on a motion to formalize a Letter of Intent or LOI outlining terms and conditions from the City. The LOI was needed so that the USPS could move forward with more due diligence such as site work, engineering and environmental surveys. A purchase agreement would come later. Members Michael Mulvahill, Randy Greene and Bob Ellis were opposed while Mayor Nick Proctor, Mayor Pro-Tem Steve Manor and Councilwoman Jan Lobur were in support. Member Jeanette Ambrose was absent, so it’s possible another discussion and vote could take place at a future meeting.

A large part of the meeting was spent addressing concerns from residents who live in a neighborhood behind the proposed site. Since the USPS is a federal entity, it is not bound by state or local regulations. One big issue is drainage on the site but other concerns involve light pollution, noise and traffic. Residents also commented on the City bearing the burden of more growth in surrounding townships, when roughly only one-quarter of city residents actually account for Post Office business. Resident Ann Heins said she lives in the area and called the project “butt-ugly”. She commented that the City could sell other property and said other states no longer locate post offices in residential areas. Heins said she doesn’t want the noise coming from a warehouse with trucks backing in – adding with only a quarter of the mail coming from the city, she doesn’t think it’s fair to residents in town and would be really disappointed if the City goes for it.

Mayor Nick Proctor commented the USPS might not even be able to accommodate what’s covered in the LIO but said solving drainage issues was big for him if they decide to move forward. In voting against the motion, Councilman Ellis said he was convinced and that the City already has a lot of non-taxable properties on its rolls with county agencies and others. Ellis commented he was against setting aside a big parcel that has a lot of community opposition and won’t generate tax revenue – adding he would rather see it sold to a private industry or business that could generate tax revenue in the future. Among the criteria from the USPS in analyzing different sites was that a new facility stay in City limits. The old Post Office property could then be brought back onto the city tax role and if sold, generate needed future revenue. The City continues to face structural budget challenges, in part due to what officials say is a broken state funding model. Since 2003, the state has reallocated statutory revenue sharing to balance its budget. The City has been making cuts and changes for years due to the structural issues and other budget constraints but it has been getting more difficult.

Interim City Manager Erv Suida told WHMI back in 2013 there was direction from Council to start looking at vacant property owned and maintained by the City to sell it for revenue and get it off the maintenance schedule that’s costing taxpayers. As it stands, Suida says it’s still a vacant parcel owned by the City but maybe come modifications could be made and bring back the USPS to Council for additional consideration as they didn’t have one member and it was a 3-3- vote. He says the City could also look at marketing and selling it. Suida says the parcel is master planned as an employment district but they are also looking at other pieces of property in the City to sell. He says it’s something they’ve wanted to do since 2013 but unfortunately then the market wasn’t strong enough to accommodate and he thinks they’re at a point now where it would be pretty marketable and could get it out there. Suida said while this is kind of a postponement, he doesn’t think it’s quite over and they are still going to look at what can be done to get rid of various properties.

The City website has a page with information about the potential Howell Post Office project for those interested. A link is provided. More information is included in Monday's Howell City Council meeting packet.