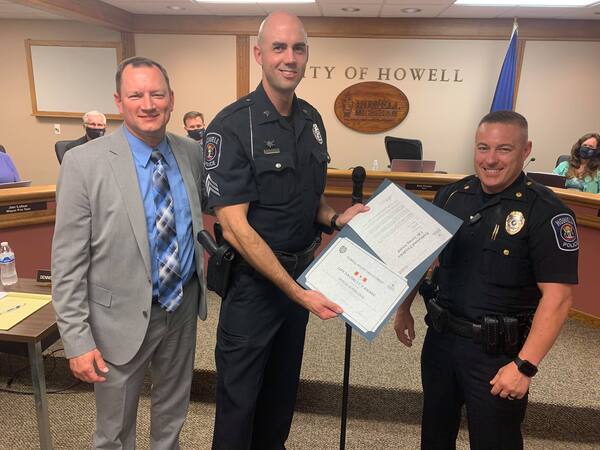 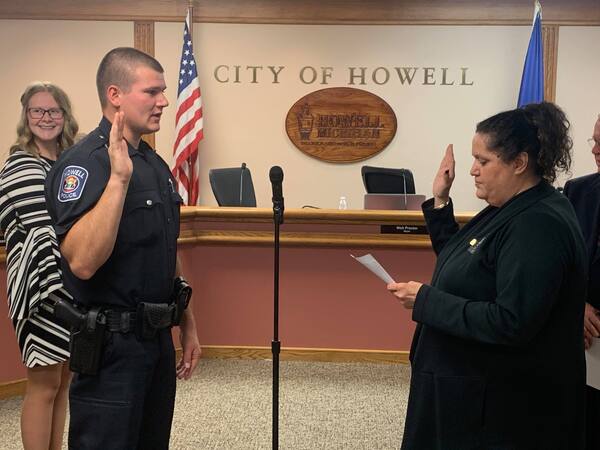 
The City of Howell’s Police Department is welcoming a new officer, while another has been promoted and was presented with a surprise Lifesaving Award.

At Monday night’s City Council meeting, Detective Austin Nash was recognized for his good work with the department in being promoted to sergeant. He recited the oath of office and his wife did the badge-pinning.

Nash commented that he loves working in Howell, saying it’s a great place with great people. He started his professional career in the U.S. Army as an infantry team leader and decided to pursue a career in law enforcement.

Nash received his associate’s degree from Mott Community College and attended its Law Enforcement Regional Training Academy in Flint. He’s been in the law enforcement field for 6 ½ years, with the past 4 ½ years with the Howell Police Department. During that time, Nash has served as an officer and detective, as well as a member of the Livingston Regional Swat Team.

In addition to his promotion, Nash was presented with the Professional Excellence Lifesaving Award for his actions in saving a man who had intended to take his own life.

Mayor Nick Proctor stated that Nash has been an outstanding leader both as an infantryman and officer and his promotion to sergeant to serve the community will continue their tradition of excellence in policing and they’re grateful to have him.

Proctor commented that police officers look at the good, bad, ugly in life and they see it all before describing an incident on June 2nd in which Nash was patrolling the area of Kensington Inn when a staff member advised that a male subject was observed hanging in a room, believed to be deceased. After responding, Proctor stated that Nash noted the man still had color in his skin and checked his vitals. He stated the subject responded and Nash immediately cut him down and provided initial care until medics arrived – adding investigation showed the man had consumed several prescriptions pills and left a note indicating his intentions to commit suicide.

Proctor reported that because of Nash’s actions, the man is expected to make a full recovery. He added that as a result of Nash’s professionalism and quick thinking in assessing the situation, and without regard for his own personal safety, took appropriate action that resulted in the saving of a human life.

Meanwhile, Aaron Lassila, who was born and raised in Howell, was sworn in during a ceremony at Monday night’s City Council meeting. His family was present and his wife did the badge-pinning honors. Lassila graduated from the Washtenaw Community College Police Academy in September. He commented that it was a pleasure and happened really fast, adding he was thankful for the opportunity and to be able to support his family.

Mayor Proctor stated that Lassila had a calling very early for law enforcement and growing up in the community, gained a deep respect and caring for those who live in the area, and knew he wanted to spend his career in his hometown. With that dream and hope now a reality, Proctor told Lassila they’re excited and look forward to seeing what the future has in store for him and his family at the Howell Police Department.