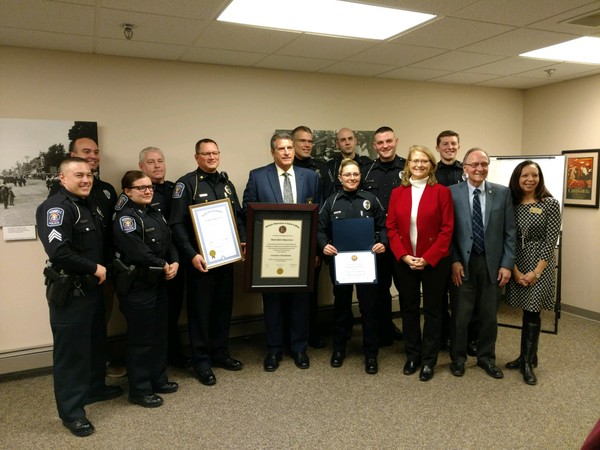 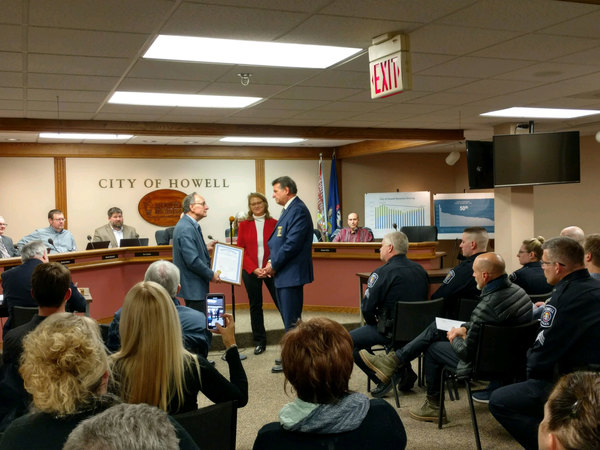 Monday marked a monumental night for the Howell Police Department.

Representatives from the Michigan Association of Chiefs of Police presented Chief George Basar and department members with a Certificate of Accreditation – making it the only police agency in Livingston County to be recognized and one of very few in the entire state. Over the past year, the department voluntarily went through what was described as a very tough and rigorous process. It involves a review of all operations, facilities and administrative practices, policies and procedures to determine and demonstrate that the department complies with best practices and meets the highest standards for law enforcement agencies in the state.

Chief Basar says it’s a real feather in their cap and a high recognition of the quality of policing they provide to the Howell community. He commented during Monday’s City Council meeting that it is a really significant achievement for the department and would not be possible without everyone’s hard work, every day, 24-7 to try and deliver the best quality service they can to the community. Basar said he was extremely proud and hopes the community is just as proud as well. He acknowledged different members of the department for their various roles and concluded by stressing it was all a team effort and everyone did one heck of a job.

Michigan Association of Chiefs of Police Executive Director Bob Stevenson commented the process took an excellent department and made it better. He noted there are 600 police departments in the state – with 401 being municipal police agencies. Stevenson said the Howell Police Department is only the 20th in the state to go through the procedure and attained a Certificate of Accreditation – meaning the department has accomplished 95% of what other departments have not been able to do and it’s quite the accomplishment.

A large crowd was present at the meeting to mark the achievement and Mayor Nick Proctor commented that police across the United States have had a tough decade and a lot of men and women put their lives on the line to protect others. Proctor said he believes one of the core responsibilities federal, state and municipal government is to protect citizens and all of the Howell department’s officers do a fantastic job. He further relayed a funny story about someone who got pulled over for a traffic citation and received a ticket but told him it was one of the most pleasurable experiences they’ve had for such a situation.

Accreditation Program Director Neal Rossow commented accreditation is very hard, likening to schools and hospitals that receive accreditation. He noted the process is Michigan law enforcements attempt to try and improve public service in the state. Rossow said there are 105 standards and best practices departments have to incorporate into policies and procedures and it’s a very difficult process to get through. He stressed while it is hard work, it’s worth it and Howell should be wildly commended as many departments won’t even take it on. The work doesn’t stop either as the department has to submit various reports showing continued compliance with accreditation standards over the next three years.

In addition to the Certificate of Accreditation, certificates of recognition from State Senator Lana Theis, State Representative Hank Vaupel and United States Representative Elissa Slotkin were presented to the department. (JM)