Howell City Council To Work With Library On Parking Issues 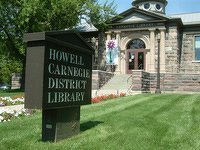 The Howell City Council met recently and affirmed its commitment to working with the Howell Carnegie District Library to address parking issues as part of a future potential redevelopment project.

The City of Howell is a Redevelopment Ready Certified community and as part of that, the City has been engaging with the Michigan Economic Development Corporation on marketing and development potential for what has been dubbed the City’s main priority site. It’s a downtown block bounded by Walnut, Wetmore, Center and Clinton. Half of the property is currently owned by the library and half by local businessman Joe Parker, part of which is currently used as the Hive Teen Center. As part of that, one of the things being looked at is getting both owners to work together and perhaps sell both properties so that a development could come in for the entire block, instead of doing half at a time. City and DDA staff have been having conversations with the parties involved as well as MEDC employees to determine if there is a way forward. Those topics have been focused on the potential sale prices of each parcel, downtown parking and how those intertwine. The library is said to have purchased their portion of the block with the express intention of constructing parking on site. Therefore, any project involving redevelopment of the property for a use other than parking will need to address the library’s parking needs in some way. Staff wanted to gauge Council to make sure there were no major concerns with the approach, just a commitment to help solve the problem when the time comes if the library will be part of the project.

Community Development Director Tim Schmitt told Council to move forward, both parties need to agree to put their properties on the market – noting Parker is actively marketing his property, which the state will assist with but the library needs to agree or disagree. He says they can’t solve the parking problem right now because they don’t know what any future project would look like. However, Schmidt said it could be solved in the future and it’s not a difficult conversation because they have realistic parking needs they have identified. He said the library provided hard numbers as to the number of parking spaces the library thinks it has, what is needed and the gap – which is around 25 spaces and not a lot in the scheme of a city block redevelopment. To break through the impasse, Schmidt said they were seeking a letter of commitment from the City to work with the library to solve the problem if they are willing to market the property.

Interim City Manager Erv Suida told WHMI the library needs additional parking and the City is committed to helping them find that in the future. He says it would be hard to know what that looks like now, until they know what any potential future development would look like, but the ask is not that great and they’re looking forward to them possibly partnering up and finding a developer interested in the whole block. All in all, Suida says it will be a positive thing and think they can help them out with that parking issue.

Council agreed that moving forward, it would like to be a part of the solution and there are a number of potential options to help fill the library’s parking gap. The consensus was to move forward and be part of the solution and communicate that with library officials. Mayor Pro-Tem Steve Manor said he had no problem making a commitment to working to solve the problem, adding the library is extremely important to the health of the town. Mayor Nick Proctor commented the City has been talking about parking for years and will have to do something because the time is coming. He says the library parking issues are a small composite of the bigger picture and the City will need to manage the impending situation and come up with some solutions. (JM)