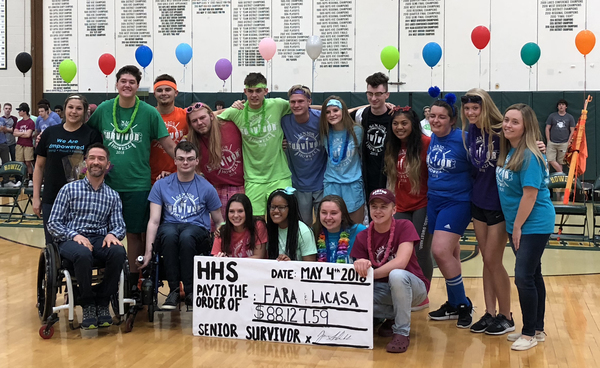 Following a busy week of fundraising, competitions and 14 students living in their school, Howell High School’s Senior Survivor fundraiser has raised $88,127. Katelin Bensman was named the winner of Senior Survivor for outraising all of the other survivors. The money raised will be split between two non-profit organizations, the Friedreich's Ataxia Research Alliance (FARA) and LACASA. FARA is special to the senior class as one of their classmates is affected by the rare disease which causes nervous system damage and movement problems.

Senior Survivor began last Sunday when 14 Howell High School seniors moved into their school with the goal of remaining in the competition until Friday. Students collected donations during the day and competed in immunity and reward challenges at night. Some included a food challenge involving eating snails, completing an obstacle course, driving a police car through a training course and a lip sync battle. At the end of each school day, the two Senior Survivor contestants who raised the least amount of money that day were eliminated.

Howell High School Principal Jason Schrock said each year Senior Survivor brings the school, district, and community together as one. He says it’s incredible that high school students can raise more than $88,000 in just one week and he is always amazed at the generosity shown by students and the community during Senior Survivor. (JM)