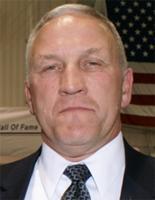 Plans are moving forward to name the Howell High School football field after a teacher, coach and mentor with a lengthy sports and community legacy.

New turf is going in at the high school stadium field and when a committee was formed to discuss potential naming, it was noted that one name repeatedly surfaced – John Dukes. The Howell Board of Education met last week and the naming of the football field turf was among items discussed.

Dukes was referred to as the face of Howell football and the district in general. He’s coached numerous sports in Howell including football, baseball and wrestling and still regularly volunteers at games. He was inducted in the Michigan High School Football Coaches Association Hall of Fame in 2008 after 34 years of coaching football at Howell and Hartland High Schools. During the meeting, Dukes was described as a man of faith, family, and community who always steps up in general.

Superintendent Erin MacGregor tells WHMI the item was brought forth for information for board members and general discussion. MacGregor says board policy states if members of the school community, or the community in general, have made significant contributions to the school community then the board can take action to name buildings, or in this sense an area, after that person. MacGregor says John Dukes’ name has certainly surfaced as someone of high character, integrity, and just great leadership. He says the item will be back on the agenda in June for official action but the board was supportive.

The turf would go in this summer if the board moves forward with the action at the June 11th meeting, and then the name and stitching in honor of Dukes would be put on the field at the high school stadium. Those on the committee noted a number of people easily stepped up to commit financially to the project and made contributions, thus no general fund dollars will be used. Photo: Michigan High School Football Coaches Association Hall of Fame. (JM)