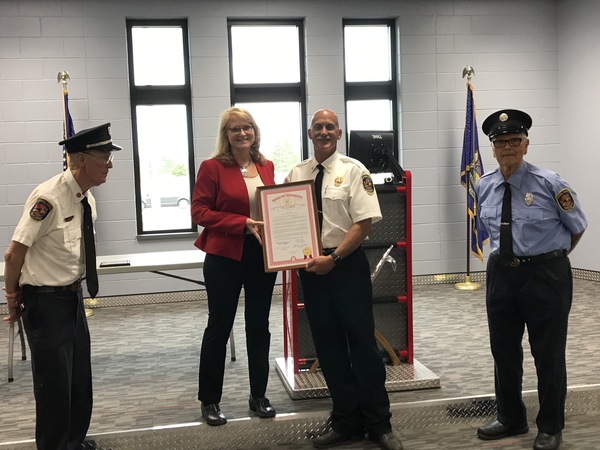 
After nearly 12 years at the helm, Howell’s longtime Fire Chief has officially retired.

Andy Pless has been Chief of the Howell Area Fire Authority since 2008, when he succeeded longtime Chief Jim Reed. Pless joined the Howell Fire Department in 1987 and retired after over 35 years of being a firefighter. Friday marked his final day and a farewell event at the main station was well attended. In addition to Pless, Jay Hickman and John Peretto also retired and all three were presented with proclamations from State Senator Lana Theis. Pless said being able to share the day with Hickman and Peretto, who have over 100 years of service between the two, was pretty cool. Hickman has 58 years of fire service experience while Peretto has 50.

Pless told WHMI he’s been preparing and planning for past three months but when he woke up and put on his uniform for the last time, it was a big deal and little emotional. He said it was an awesome day and a little overwhelming but he’s ready to retire and see what comes next. Pless said he is staying local but will be doing some traveling with his family and plans to take the winter off. After that, Pless says he’ll figure out the next chapter and perhaps get a part time job in the spring.