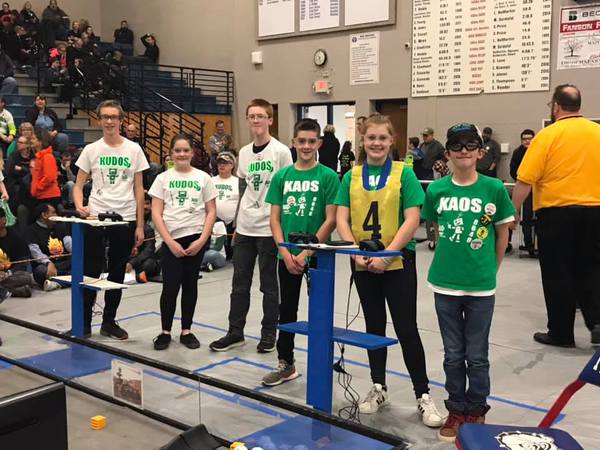 Three of Howell's FIRST Tech Challenge robotics teams will be competing for a state championship this weekend.

Three Howell Public Schools FIRST Tech Challenge (FTC) robotics teams have advanced to the FIRST in Michigan FTC State Championship that kicks off today. Those advancing are Team #15229 Kids Understanding Developing Outstanding Science (KUDOS), Team #10538 Kids Inventing Learning Technology Science (KILTS) and Team #8646 Kids Acting Out Science (KAOS). The teams are advancing based on their performance at two qualifying competitions held earlier this year. This is the fourth consecutive year that Team #8646 KAOS and Team #10538 KILTS have advanced to the state finals. It will be the first time for team #15229 KUDOS, who are currently in their rookie season.

This year’s FTC competition is Rover Ruckus. In Rover Ruckus, the student created and operated robots will work in a three-team alliance as they try to a higher score than the opposing alliance by descending from the Lander, collecting Minerals from the Crater and sort Minerals into the Cargo Hold of the Lander. The FIRST in Michigan FTC State Championship runs through December 15th at Kellogg Arena in Battle Creek. (JM)