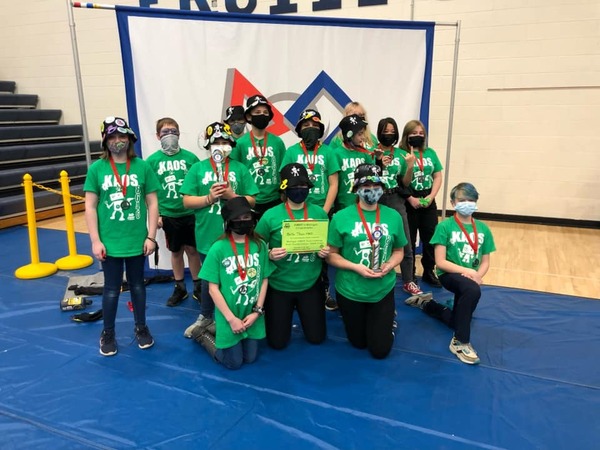 
Two robotics teams from Howell Public Schools have qualified for the state finals.

Team KAOS and Team Kilts are two of Howell’s four FIRST Tech Challenge teams that qualified for the FIRST in Michigan State Finals based on their performances at events last weekend.

Team KAOS qualified based on their performance in the Fruitport Qualifier and also earned the Motivate Award at the event. The award celebrates the team that represents the essence of the FIRST Tech Challenge competition through Gracious Professionalism and general enthusiasm for the overall philosophy of FIRST and what it means to be a FIRST Tech Challenge Team.

Team KILTS qualified based on their performance at the Midland Qualifier and also earned the Think Award at their event. That award is given to the team that best reflects the journey the team took as they experienced the engineering design process during the build season.

This year’s FTC game is in Freight Frenzy. In the game, teams and their robots must navigate a complex transportation system by traversing barriers and racing against time to load and deliver essential items to those who need them most.

All four of Howell’s FTC teams will be back in action when the Highlander Robotics program hosts the FTC Howell Qualifier this Saturday at Parker Middle School. Opening Ceremonies are set for 10:30am with qualifying matches beginning at 11am.

More information is available in the link and attached press release.