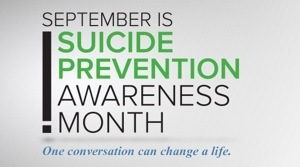 The City of Howell is recognizing September as National Suicide Prevention Awareness Month.

During last Monday night’s meeting, Mayor Nick Proctor read a mayoral proclamation aloud marking the designation. He says local organizations are on the front lines of a battle that many still refuse to discuss in public, as suicide and mental illness remain too taboo a topic to speak on. Proctor further stated throughout life’s struggles, the occasional reminder is needed that everyone is silently fighting their own battles.

Suicide is the 10th leading cause of death among adults in the United States and the second leading cause of death among people aged 10 to 24. Councilman Dr. Bob Ellis shared some staggering statistics for the audience, saying suicide may actually be a lot more common that many think because unless there is very clear evidence of suicidal intent, many deaths are classified as accidental.

Ellis said suicide is rare in younger kids but it starts to increase after age 10, noting there are two peaks in the suicide rate. He says the first occurs in people between age 45 and 54 but it then drops to people between age 54 and 85, and then rises again for people over age 85. Ellis stated men kill themselves about three-and-a-half more times than women and firearms account for more than half of the suicides in the United States.

Ellis said knowing suicide is fairly common; it is still kind of taboo as people don’t talk about it and a stigma is associated with it. Ellis said he thinks since suicide is fairly common, most people know someone who has committed suicide. He shared during the meeting that his first wife committed suicide so like many families, it’s out there. Ellis said the more people talk about it though and are aware of help that’s available, then the more impact everyone can have on this.

Mayor Proctor commented that suicide has always been a heavy topic that hits him pretty hard whenever he reads articles but not long ago, he was contacted by an out-of-state councilman who lost a close friend to suicide who is now is on a personal mission to bring awareness to suicide by reaching out to municipalities across the country to have cities proclaim the month of September as National Suicide Awareness Month. Proctor felt it was a good idea and Council agreed.

The proclamation is attached. (JM)