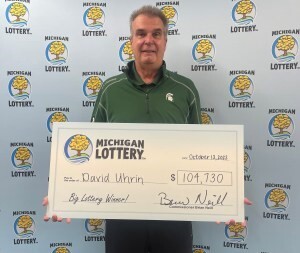 
A Howell man’s dream of winning the Lottery has come true.

63-year-old David Uhrin won a $104,730 Monthly Jackpot progressive prize from the Michigan Lottery after he was selected in a random drawing that took place September 7th. He earned entries into the giveaway by playing the Monthly Jackpot game online.

Uhrin said he’s been playing the game quite a bit lately hoping to win big. Uhrin said when he got a call telling him he’s won the second chance jackpot prize, he was amazed. Uhrin said he’s always dreamt of winning big, and can’t believe it actually happened.

Uhrin recently visited Lottery headquarters to claim the big prize. With his winnings, he plans to complete some home improvements and take a vacation.