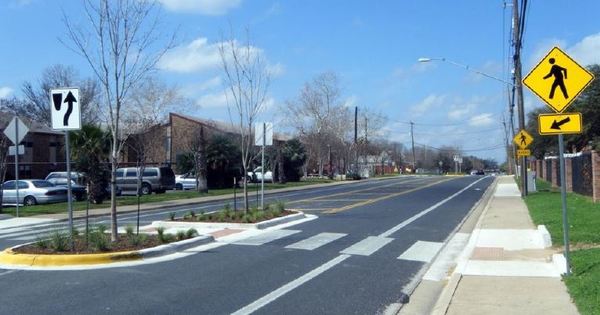 
Some pedestrian crossings will be installed along Grand River in downtown Howell.

City staff has been working with the Michigan Department of Transportation’s Brighton Transportation Service Center to add mid-block crossings along Grand River. The identified locations include West Grand River, between Chestnut and Center in front of the Howell Carnegie District Library; on East Grand River between State Street and Court; and on East Grand River in front of City Hall. Staff has been working on design and it was previously noted that there would be some parking trade-off for the proposed crossing locations. A memo states that there was some good news in that staff was able to reduce the number of parking spaces lost, from four to two at each location. MDOT has issued a permit for the work.

Original plans were centered on getting pricing from the contractor performing the Grand River resurfacing project but that didn’t work out. City staff was said to have had some difficulty finding a contractor to perform the work as many are short staffed and over booked. The only contractor that submitted pricing was Mattioli Cement of Fenton to perform the removals, construct concrete pedestrian refuge islands and sidewalk. At the virtual City Council meeting held Monday, a motion was unanimously approved for the work in an amount not to exceed $71,311.

Mayor Pro-Tem Steve Manor thanked staff for working on the project and getting MDOT approval, saying it has been a long term goal to find other ways and safer ways for people to get across Grand River - besides having to dodge cars or walk all the way up the hill to Michigan Avenue to use a traffic light. Manor added the crossings will be a great enhancement to activities downtown and a much safer environment.

DPW staff will still need to perform storm sewer installation, signage and restoration - which is estimated around $20,000 and was also approved unanimously. It was noted during the meeting that the new cost is still below what engineers had estimated for the project at around $124,000. Mayor Nick Proctor commented it will require a budget amendment but said the City has a healthy fund balance so he wasn’t overly worried about the expenditure – adding it’s something they’ve been working on for years and it will be good to see the project come to fruition at a very reasonable expense.

Photos are not actual designs but earlier renderings presented to Council.