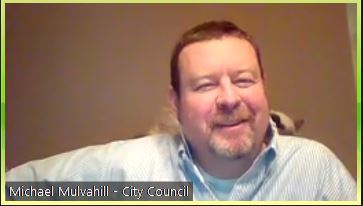 
A Howell City Councilman known for his dedication and involvement is resigning.

Under the new business portion of Monday night’s virtual Council meeting, it was announced that Councilman Michael Mulvahill was resigning effective today as he and his wife are moving out of the City. Council approved a motion accepting Mulvahill’s resignation with regrets and extended their sincere appreciation for his years of service to the City. In addition to serving on Council, Mulvahill was appointed to the DDA Board in 2014 and the Design Committee. He has also volunteered for the Pink Party, the Livingston County United Way Day of Caring and served as a crew member for a local balloon pilot at Balloon Fest.

Mayor Nick Proctor said he’ll miss Mulvahill who has been a great contributor and given a lot of time and effort to the DDA board –adding he’s been part of some very tough decisions while serving on Council. Proctor further congratulated Mulvahill on the purchase of his new home, saying he’ll be sorely missed but joked about future volunteer opportunities. Others on Council echoed those thoughts and well wishes, saying they’re looking forward to seeing him around at future festivals and activities.

Mulvahill referenced their current 1890’s money pit, saying the new home was an opportunity for the couple and they took it. Mulvahill added that he actually started his Council career by sitting in the audience and attended meetings for six years as a participant before serving – adding members might just see his smiling face in the audience in the future. Mulvahill said it has truly been an honor and privilege to serve the citizens and work with everyone on Council and City staff- saying he really believes they have some of the best city staff and is very proud of what they do.

Mulvahill’s term expires in November 2023. There is a 30-day window from his resignation to fill the vacant Council seat. Staff was authorized to begin advertising the position, which involves posting a notice of the vacancy and process to apply.