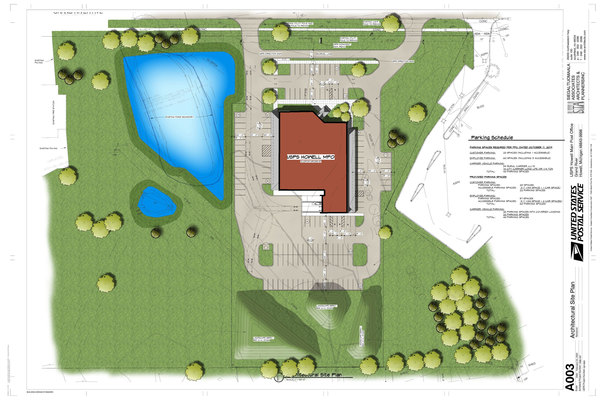 
The Howell City Council met Monday night and held more discussion on the potential relocation of the Howell Post Office.

The United States Postal Service sent a letter to the mayor and council stating it intends to relocate the main Howell Post Office to a site adjacent to the main Howell Fire Station on Grand River. It had been evaluating six different sites put forth by the City that could potentially work. The USPS appears to have now officially settled on wanting to acquire a city-owned site totaling roughly 2.6 acres for a proposed 17,881-squre-foot-facility. The current Post Office is located downtown in a residential neighborhood at 325 South Michigan Ave. The next step in the process would be to develop a letter of intent or LOI from the City stating it intends to sell the property to the USPS, which would include any conditions or terms of such an agreement such as light pollution, screening, storm water management and the cost. Four residents spoke on the topic at the meeting. After discussing the matter and hearing concerns, Council decided it would be best to slow down at this point and prudent to invite representatives back to talk with Council and residents about why the site was selected versus somewhere else and see where that goes.

There has been considerable opposition from neighbors who live behind the proposed site and nearby. There have been complaints about traffic flows, parking, grading, lighting, landscaping, noise and truck traffic. That’s in addition to the main concerns voiced about flooding as the area has known drainage problems. Lynn Gates lives on Browning Drive behind the proposed site and told Council she can’t imagine building anything on that property. Gates said it’s truly a classic case of NIMBY or “Not In My Backyard”. She invited Council to come visit her home and the site but to bring boots because it’s basically a big lake back there. She felt members need to actually to experience what the property looks like and what it does because it retains a lot of water – raising further concerns about lighting and traffic.

Mayor Nick Proctor commented that he doesn’t object to slowly moving forward with a letter of intent. He said they can reach out to Post Office representatives and ask that they come back to meet with council and residents to run through their decision making process and what their ideas would be for the site. Proctor said he felt some comments had value and that they should inch forward and make the invite but also didn’t want to shut the door on anything. Proctor added if the USPS can’t come back for another meeting, then the City could always request in writing their review process, why the site was selected and others deemed not appropriate.

Interim City Manager Erv Suida told WHMI the plan is to get the USPS back in March talk about plans and why the site was selected and their motivation for building there to hopefully satisfy some of the resident concerns. He says there was no official action, just discussion to bring Council up to speed on where everything is at in the process and see if there was any desire to move forward with the LOI. Suida says what staff took away is they’ll just slow down a bit and invite the USPS back to talk about concerns with Council and residents. At this point, Suida says they’re essentially in limbo - it’s a property the Postal Service is interested in and the City might be interested in selling so they’ll see. He added that a news event has also been developed for the city website for people who might want additional information on the plans and property or for those who just want to get up to speed that haven’t been attending meetings.